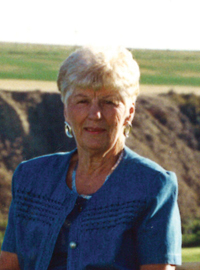 Berta Woolfrey passed away on August 31, 2017 at the age of 97. She was born in Bingville, AB, on August 5, 1920, one of eight children of Danish Immigrants, Laura and Hans Hansen. She attended school in Medicine Hat where she met Bill Woolfrey. They married on June 8, 1940, the same day that Bill joined the Army. When Bill was posted overseas, Berta went to live with Bill’s parents and helped run the family dairy farm – milking cows and delivering milk to customers. Bill returned after the war, and the couple had two sons, Ted (1941) and Dick (1946), and they continued to run the Dairy Farm until the late 1970’s and in 1990 they sold the land to Ted and his partners to develop Cottonwood Coulee Golf Course. Berta was a hardworking and resourceful person. In addition to farm chores, she was a seamstress, dog groomer and general “handywoman” who was not afraid to tackle any project. “Waste not, want not” was one of her favorite expressions but Berta also liked to have fun. She had a flare for fashion, was always well-dressed with her hair done and ready to enjoy a good party. She and Bill travelled extensively and in retirement enjoyed taking their RV to Puerta Penasco, Mexico for the winter months. At age 70, Berta took up golf, made new friends and took golf trips to Thailand and Portugal. In her later years, she took great joy in being able to spend time helping to raise her great grandchildren, and she and Morgan developed a very close bond.

The family wishes to extend a special thank you to the wonderful staff at Sunnyview who took great care of Berta for the past three and a half years.

The Funeral Service will be held at SAAMIS MEMORIAL FUNERAL CHAPEL, #1 Dunmore Road SE, on Wednesday, September 13, 2017 at 2:00 p.m. with Life Celebrant, Lynett Getz officiating. In lieu of flowers, memorial gifts in Berta’s memory may be made to the Alzheimer’s Society, #201, 770 – 6 Street SW, Medicine Hat, AB, T1A 4J6. Condolences may be sent through www.saamis.com or to condolences@saamis.com subject heading Berta Woolfrey. Funeral arrangements are entrusted to