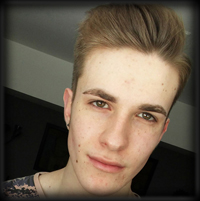 Michael, beloved son to James Summers and Brenda Fischer, passed away in Calgary on Monday, September 11, 2017, at the age of 20 years. He is survived by his four siblings, Kari (Mathew Fuller) and their children, Makayla and Mark; Robert; Jennifer (Neil Hitchcock) and their daughter Desirae as well as Lisa. Michael was very fortunate to have Tiana as a life long friend who was always there for him to the very end. He had two cats. Stripes, who he rescued when he was eight years old and Danger, who he adopted from the SPCA when he moved to Calgary. Michael attended Seven Persons School and Eagle Butte High School. He loved drama and was involved with Hatterland Children’s Theatre and EBHS Drama Club. He went on to study at the University of Calgary Drama Department and was in the production of Six Characters in Search of an Author, this past fall. Michael loved to perform both on and off the stage. At Michael’s request, a private family interment was held this past Saturday at the family plot in Hillside Cemetery. The loss of Michael will forever be a wound that does not heal. Donations in his memory can be made to the SPCA, 55 Southwest Drive S.W., Medicine Hat, Alberta, T1A 8E8. (Condolences may be expressed by visiting our website at www.cooksouthland.com) Honoured to serve the family is