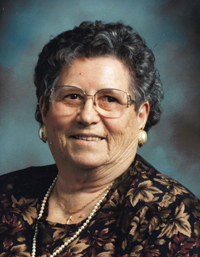 It is with great sadness that the family of Rosa Racz (nee Csernik), announce the passing of their beloved mother. Rosa passed away in Taber on Wednesday, September 13, 2017 one week after celebrating her 92nd birthday with family. She was a loving mother and grandmother, whose life had no shortage of challenges, which she faced with faith, perseverance and humour. She lived a life that exemplified a strong Christian faith.

The Funeral Mass will be celebrated at St. Augustine’s Catholic Church, 5009 – 48 Avenue, Taber on Monday, September 18, 2017 at 10:30 A.M. Burial to follow at the Prairieview Cemetery, Grassy Lake at 1:30 P.M. Condolences may be forwarded by visiting our website at www.southlandfuneral.com.

Rose will be deeply missed by family and those whose lives were touched by her.

In friends so desire, memorial tributes in Rose’s name may be made directly the Taber and District Health Foundation (Palliative Care), 4326 – 50 Avenue, Taber, Alberta T1G 1N9.

One Condolence for “ROSE RACZ”