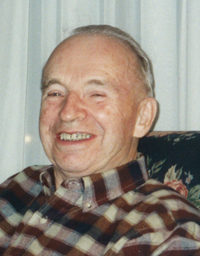 William “Bill” Horace Gilchrist of Medicine Hat, passed away peacefully in Palliative Care at the Medicine Hat Regional Hospital on Tuesday, September 12th, 2017 at the age of 95. He was the beloved husband of the late Carrie Gilchrist. Bill was born on May 21st, 1922 in Coldwater, Ontario to Roland and Ellen Gilchrist. He grew up on the Shepherd farm where his father was employed, with his one brother and two sisters. At the age of 20, he enlisted in the Royal Canadian Air Force, and he earned his 3rd year, Motor Vehicle Repair in 1946. Bill’s passion for airplanes took him to many places including Sardinia, Gander, Newfoundland and Bournemouth, England. He remained a career military man as a Civil Servant for the Armed Forces stationed in Portage La Prairie, Manitoba. Bill met and later married his “lovely wife” on September 15th, 1979, and together they resided in Portage until his retirement in 1987. Upon his retirement, they moved to Medicine Hat in 1988 to be closer to family. Bill enjoyed being an active member of the Medicine Hat Church of God (Pentecostal), camping, tinkering with small engines, learning to use a computer to research subjects of interest, walking his dog and watching his grandchildren, and later, his great- granddaughters grow up.

Bill was a quiet, meticulous, steadfast man who could figure out any problem given enough time. Once he set his mind to something he didn’t quit until he fully understood all of the working parts. Bill was also very generous, and would extend a leg up to anyone in need.

The Family wishes to extend special thanks to the wonderful staff on the Palliative Care Unit and all of the nursing staff who looked after Bill over the past few years. The Family invites those wishing to pay their respects to meet at SAAMIS MEMORIAL FUNERAL CHAPEL, #1 Dunmore Road SE, on Thursday, September 21st, 2017 at 12:45 p.m. and join them for procession to the Graveside Service to be held at SAAMIS PRAIRIE VIEW CEMETERY at 1:30 p.m. Donations in Bill’s memory may be made to the Alberta Heart and Stroke Foundation, 340A Maple Avenue SE, Medicine Hat, Alberta, T1A 7L5, or to the Gideon’s Bible Society, PO Box 3619, Guelph, Ontario, N1H 7A2. Condolences may be sent through www.saamis.com or to condolences@saamis.com subject heading Bill Gilchrist. Funeral arrangements are entrusted to