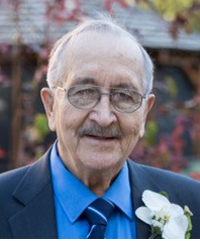 It is with great sadness that the family of Reuben Harvey Kurpjuweit announces his passing in Medicine Hat on September 17, 2017 at the age of 89. Reuben was born on January 19, 1928 in Medicine Hat, the youngest child of Rudolph and Lydia Kurpjuweit. Reuben grew up on a farm in the Woolchester area (south of Medicine Hat) with three older brothers and two older sisters, attending Little Plume School. On October 11, 1952, he married Doreen Seitz. They lived on Great Hope Ranch where they raised five children (Patty, Arvid, Merle, Cyndi and Sheldon). Reuben was a hard-working farmer/rancher and provided well for his family. To supplement the family income, he drove substitute school bus for many years. Later in life he worked for several years as the maintenance man at Hillcrest Christian College and Primrose Villa.

Reuben enjoyed golf, and participated in baseball and curling well into his senior years. He was competitive in rook, floor curling, crib and pool.

At the age of 87, Reuben found love again and married Stella Friesen on October 10, 2015. They treasured every day, knowing they wouldn’t have many years together, and celebrated their anniversary on the 10th of each month.

We will see you soon, Dad.

Those wishing to pay their respects may do so at SAAMIS MEMORIAL FUNERAL CHAPEL, #1 Dunmore Road SE, on Sunday from 7:00 to 9:00 p.m. The Funeral Service to celebrate Reuben’s life will be held at HILLCREST EVANGELICAL CHURCH, 3785 – 13 Avenue SE, on Monday, September 25, 2017 at 1:00 p.m. with Pastor Mark Bolender and Pastor Lance Duncalfe, co-officiating. A private family interment will follow at Saamis Prairie View Cemetery. As an expression of sympathy, donations in Reuben’s memory may be made to the Prairie Gleaners Society, P.O. Box 656, Medicine Hat, Alberta, T1A 7G6, or to Whispering Pines Camp, Box 23110 Medicine Hat Mall PO, Medicine Hat, Alberta, T1B 4C7. Condolences may be sent through www.saamis.com or to condolences@saamis.com subject heading Reuben Kurpjuweit. Funeral arrangements are entrusted to