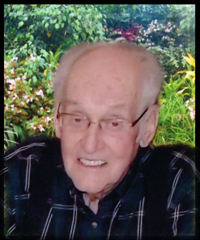 It is with heavy hearts that the family of Mr. Lawrence William Wiebe, beloved husband of the late Mrs. Betty Wiebe, announce his passing at the Medicine Hat Regional Hospital on Saturday, September 16, 2017, at the age of 87 years. Lawrence was born June 8, 1930, in Waldeck, Saskatchewan. He attended school in Rush Lake, Saskatchewan and later moved to Medicine Hat. In 1953, he married Betty and they celebrated 60 years of marriage before her passing in 2013. Lawrence worked in numerous fields before gaining employment with the City of Medicine Hat where he worked in Parks and Recreation for thirty years. He loved spending time in the outdoors and gathering with people, whether it was to go camping, attend rodeos or branding parties, go for coffee with friends or simply going for a drive to Elkwater, he liked to be out and about! Lawrence took great pride in his yard and worked diligently in his garden. This was evident as his home and garden were immaculate! He dearly loved his family and will be deeply missed by his three children: daughter, Debbie (Elroy) LaFond and their children, Jason (Carrie) and Alisha; son, Darrell Wiebe and daughter, Delaine (Vance) Nickel and their children, Carissa and Taylor, as well as five great-grandchildren. He is also survived by a sister, Edna Dunham and a brother, George (Donna) Wiebe as well as numerous nieces and nephews. He was predeceased by his wife, Betty, two brothers and a sister. Those wishing to pay their respects may do so beginning one hour prior to the service. The Funeral Service will be held at Cook Southland Funeral Chapel, 901 – 13 Street S.W., Medicine Hat on Friday, September 22, 2017, at 2:00 p.m. with Pastor Bob Findley officiating. Interment will follow at Hillside Cemetery. (Condolences may be expressed by visiting our website at www.cooksouthland.com) Memorial donations in Lawrence’s name may be made directly to the Canadian Cancer Society, 200 – 325 Manning Road N.E., Calgary, Alberta, T2E 2P5. Honoured to serve the family is