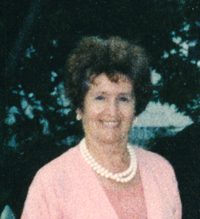 Beloved wife of Arnold St. George (1921 – 2008) for 65 years. She is lovingly remembered by her son, Bill and daughter, Wendy (Rob) and grand-daughter, Kim (Trevor) and great-granddaughters, Emily and Hailey, sisters-in-law and brother-in-law and nieces and nephews in Canada, USA, and Australia. Predeceased by her brother Bill and sister, Dorothy.

Joan was born in Sydney Australia to British parents and grew up in England. She lived in London during WW2 and met and married (1943) Arnold St. George a Canadian soldier there. After the war ended Joan followed Arnold to Canada as a ‘war bride’ on the ship Letitia which docked in Halifax where all the ‘war brides’ boarded trains which took them across Canada to be reunited with their husbands. Joan’s destination was Arnold’s home town of Fort Macleod, Alberta. After eight years there, Arnold joined the RCAF and the family travelled across Canada. A highlight of these years was when the family was sent to 3Wing Airbase Germany for four years. There were many cherished memories of family holidays spent throughout Europe and most of all Joan was able to return to family in England. Her family spent many wonderful seaside holidays with grandparents in Cornwall.

Joan was a beautiful, elegant woman inside and out and deeply loved music, the arts and fashion. She was very creative, a wonderful cook and loving Mum. “We were blessed to have a mother that loved us unconditionally, protected us and read us bedtime stories. She taught us and showed us that the world is a vast and interesting place, to respect others and love animals.” Joan and Arnold rescued and cared for many pets over the years. She will be deeply missed and her memory cherished.

Many thanks and gratitude to the nurses and staff at Haven View whose care and caring for Joan over the last 10 years has been a blessing to her and her family.

In honour of Joan’s life, a gathering of family will be held at a later date by the ocean that she so dearly loved.

(Condolences may be forwarded through www.cooksouthland.com) If friends so desire, memorial tributes in Joan’s name may be made directly to the SPCA, 55 Southwest Drive, SW Medicine Hat, AB. T1A 8E8 or an animal rescue of your choice. Honoured to serve the family is