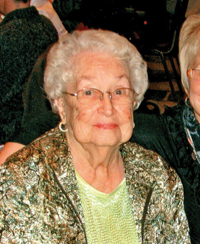 Cleora Grace Hall of Medicine Hat, beloved wife of the late Robert Hall, passed away peacefully on Saturday, August 19th, 2017 at the Medicine Hat Regional Hospital at the age of 96 years. Cleora was born on December 29th, 1920 to Leslie and Pearl Haynes. She received her early education in the Rainier district schools and completed high school at St. Theresa’s Academy in Medicine Hat. She married Robert Hall on December 23rd, 1939 and together they made their home in Medicine Hat. Cleora was also predeceased by her parents; her brother, Lowell; and two precious grandsons, Bradley and Jeffrey Hubka. Cleora is survived by her three daughters: Gayle (Albert) Hubka and their son, Graham (Bernadette) Hubka, all of Nanaimo, BC; Evelyn (Peter) Wilde and their children, Michelle (Rod Almond) Hayden of Red Deer, Nancy (Jason Slaby) Carlson of Sherwood Park, Michael (Marcia) Kleckner, Nina (Dallas) Duncan, Tom (Christy Gust) Wilde, and Kerry Wilde, all of Medicine Hat; and Leslie Ann (Bob) Pocsik and their children, Marnie Pocsik, Charles (Leslie) Pocsik, and Jason (Melanie) Pocsik, all of Medicine Hat. Cleora is also survived by twenty-three great-grandchildren and two great-great-grandchildren. Mom had a passion for design and creating whether it was planting beautiful gardens, knitting intricate patterned sweaters and Hardanger or sewing party dresses. Her daughters would like to express their sincere gratitude to Dr. M. Wong who took such good care of Mom’s medical issues and to the Good Samaritans for their kind care in these last few years. The Funeral Service will be held at SAAMIS MEMORIAL FUNERAL CHAPEL, #1 Dunmore Road SE, on Saturday, September 30th, 2017 at 3:00 p.m. with Gary W. Goran officiating. A Private Interment will take place at Hillside Cemetery. Memorial gifts in Cleora’s memory may be made to the Canadian Cancer Society, 325 Manning Road NE, Calgary, Alberta, T2E 2P5. Condolences may be sent through www.saamis.com or to condolences@saamis.com subject heading Cleora Hall. Funeral arrangements are entrusted to