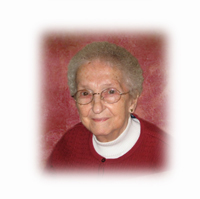 Mrs. Adriana (Jean) Vandenberg, beloved wife of the late Pieter Vandenberg, passed away at the Medicine Hat Regional Hospital on Monday, September 25, 2017, at the age of 94 years. Jean leaves to mourn her passing: four daughters, Trudy (Eric) Papsdorf of Edmonton, AB., Nellie (Don) Starke of Nanaimo, BC., Betty (Lloyd) Bischke of Medicine Hat and Linda (Rick) Boksteyn of Medicine Hat; grandchildren, Michael (Trudy) Bischke, Colleen Starke (Liam Malone) Kristie (Phil) McMechan, Heather (Trevor) Stefaniw, Kara (Nathan) Doell, Derik Boksteyn, Ben Boksteyn (Janae Bitz) and three great-grandchildren. She is also survived by one sister-in-law, Corrie van den Berg as well as several nieces and nephews. Jean was predeceased by her husband, Pieter; parents, Martinus and Pieternella van Beveren as well as all of her siblings, two brothers, John van Beveren and Pieter van Beveren; three sisters, Elizabeth Willard, Lena DeGraaf and Pieternella Moerland. Jean was born on January 8, 1923, in Stavenisse, The Netherlands. In 1948, she married Pieter Vandenberg and together they immigrated to Canada in 1952. They moved to Monarch for a short period of time before making their home in Medicine Hat. Jean was very proud of her four daughters, grandchildren and great-grandchildren. She was a very loving mother who demonstrated hard work, integrity, courage and strong family values. She was very grateful for the simple things in life and her smile and warm heart left a lasting impression with all who knew her. Jean was a very determined lady, overcoming many obstacles to her health over a number of years. After the passing of her husband, she moved into the Courtyards at Meadowlands Condominiums and continued to live there up until the end of June of this year. Special thanks to Dr. Swiegers, Dr. Brent Rinaldi and Home Care Staff, for the care which allowed her to live in her own home. We also wish to thank Dr. Best and staff on 5W and 6W, who cared for her in hospital. Those wishing to pay their respects may do so starting one hour prior to Jean’s service which will be held at Cook Southland Funeral Chapel, 901 – 13 Street S.W., Medicine Hat on Friday, September 29, 2017, at 2:00 p.m. with Pastor Mike Landry officiating. Interment will follow at Hillside Cemetery with a time of fellowship and refreshments thereafter in the Cook Southland Reception Facility. (Condolences may be expressed by visiting our website at www.cooksouthland.com) If friends so desire, memorial tributes may be made to the Kidney Foundation of Canada, 6007 – 1A Street S.W., Calgary, Alberta, T2H 0G5. Honoured to serve the family is