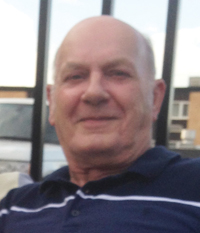 From the Mud, Through the Blood

to the Green Fields beyond.

Ian sadly left us suddenly on Thursday Sept 7, 2017 at the age of 72, while relaxing at Flathead Lake in Montana.

He is survived by Carolyn his partner then wife of 36 years. He adopted Carolyn’s family as his own and leaves to remember him his in-laws – Elizabeth and Bill Yuill, Sandra Hill, Laurie and Brian Schlachter and nephews Graham and Nathan (the other one) Schlachter, all of Medicine Hat. He is also remembered by many from his other family, the 3rd Royal Tank Regiment and numerous friends made here in Medicine Hat.

He was predeceased by his parents Hedley and Pauline Wills of Devon, England, and his much loved mother-in-law Elizabeth (Betty) Hill and father-in-law, who he never had a chance to meet, Joseph (Joe) Hill of Medicine Hat.

Ian was born in Newton Abbott, Devon, England. On completing school, Ian worked for a year at the Co-op before joining The British Armed Forces’ 3rd Royal Tank Regiment. During his 20 years of service with 3RTR, he had many postings in various countries, including BATUS. Upon leaving the forces he worked at Darlington Memorial Hospital in Darlington, England for 10 years before coming to Canada with Carolyn. Here in Medicine Hat he worked for The Monarch Corporation for 20 years before retiring at age 70.

As a young man Ian played rugby and cricket, sports he continued to follow. He also spent some time in the boxing ring. Here in Canada he quickly became a fan of hockey, the WHL in particular, attending practically every Tiger’s home game since 1995. He was also a follower of the Everett Silvertips and was thankful the two teams only met here once every 2 years, barring playoffs, as they were tense games!

Ian will be remembered for his quick wit and very British sense of humour. He will also be remembered for his love of animals of all kinds, reunited with him again will be his furry friends Corrie, Tavey and Ailsa. Donations can be made in Ian’s memory to either the SPCA or the Alberta Pound and Rescue Centre.

A gathering in remembrance of Ian will be held on Thursday Oct 12, 2017 at the Kinplex Social Room between 4:00 and 8:00 p.m. As per Ian’s wishes he would have wanted this to be a happy and casual occasion.

One Condolence for “IAN HEDLEY WILLS”