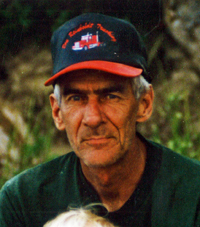 Gayle Kenneth Burkart passed away from lung cancer at the age of 75. He was born and raised in Fox Valley, Saskatchewan. Gayle took the majority of his schooling in Fox Valley completing grade 11 in Calgary and going on to study auto mechanics at SAIT. He then worked for a time at his brother’s service station in Calgary. Gayle was a natural at auto mechanics and began working at an early age in his father’s garage in Fox Valley. In his youth, he was an excellent baseball player earning the nickname “lefty” as he was a left-handed pitcher. He later played in the old timer’s league. Gayle truly loved bird hunting and always had a bird dog as friend and companion. He was the manager of the sodium sulphate plant for 30 years. In 2001 his brother, Gordon, made a deathbed request for Gayle to take over the management and care of his (and Janet’s) herd of cattle. Gayle knew nothing about cattle at the time, however, he agreed to take on the responsibility. With the help of friend, Blair, and many Hutterite friends, Gayle learned to be a cattleman and discovered he loved it. On September 16th, a group of friends gathered to celebrate his 75th birthday. It was bittersweet being that it was the last time being with him before his passing. Gayle leaves to cherish his memory his son, Cory Burkart; his daughter, Misty Burkart; three grandchildren, Destiny, Noah, and Journey Burkart; one brother, Harvey Burkart; one sister, Marlene Epneris; one sister-in-law, Janet Burkart; as well as numerous nieces and nephews. Gayle was predeceased by his parents, Alvin and Lydia Burkart; three brothers, Cliff Burkart, Maurice Burkart, and Gordon Burkart; and one sister, Mildred Russel. Those wishing to pay their respects may do so at SAAMIS MEMORIAL FUNERAL CHAPEL, #1 Dunmore Road SE, on Wednesday from 1:00 to 4:00 p.m. and from 7:00 to 9:00 p.m. A Celebration of Gayle’s Life will be held at the FOX VALLEY COMMUNITY HALL on Saturday, October 21st, 2017. Memorial gifts in Gayle’s memory may be made to the Canadian Cancer Society, 325 Manning Road NE, Calgary, Alberta, T2E 2P5. Condolences may be sent through www.saamis.com or to condolences@saamis.com subject heading Gayle Burkart. Funeral arrangements are entrusted to