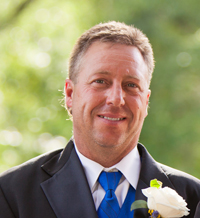 It is with heavy hearts that we, the family of Chuck Samuel Joe Hauck, announce his passing on Thursday, October 5, 2017, in Medicine Hat, at the age of 44 years. Chuck will be forever remembered in the hearts of his children, Tyler and Sierra and their mother, Laura Leah; mother, Betty Anne (Irwin) Neil; grandmother, Olga Weiss; sister, Roxie (Tracey) Sackman and their children, Shauneen, Hunter and Shelby; step- sisters, Lisa (Rob) Byers, and Sheree (Ian) McGuire as well as numerous aunts, uncles, cousins and friends. Chuck was predeceased by his father, Sam Hauck; grandfathers, Edwin Bollinger and Joe Hauck and grandmother, Mary Hauck. Chuck was a hard working man who loved camping, playing hockey, bombing around in his bobcat and quading with his kids. He took pride in everything he did and enjoyed his new venture in landscaping. He was so proud of his children and loved watching them grow into the fine young adults they were becoming. A private family service was held yesterday. Memorial donations in Chuck’s name may be made directly to the Jack Ady Cancer Centre, 960 – 19 Street South, Lethbridge, Alberta, T1J 1W5. (Condolences may be expressed by visiting our website at www.cooksouthland.com) Honoured to serve the family is