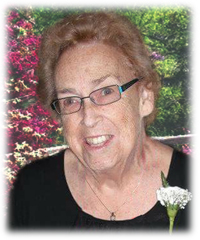 It is with heavy hearts that the family of Lucille Diane Enslen, beloved wife of the late Bob Enslen, announce her passing at the Medicine Hat Regional Hospital on Monday, October 16, 2017, at the age of 77 years. Lucille was born on August 14, 1940 in Brooklyn, Nova Scotia, a daughter to Ernest and Hilda Weagle. She grew up in Nova Scotia and completed her schooling there. After working a couple of years, she met and married the love of her life, Bob Enslen in 1960. A year later they moved to Alberta before making their way back east to Ontario in 1963. In 1974, they decided to move to Medicine Hat and have called it home ever since. Lucille was a wonderful lady who loved quilting, traveling, sewing and crafting. She will be deeply missed by her family and friends. Left to cherish her memory are her children: Stephen (Debbie), Jon (Bev), Wally and Caroline (Steve); grandchildren, Marina, Alicia, Dustin, Andrew, Kelsey, Stephanie, Amanda, Ashleigh and Jenna; great-grandchildren, Shawn, Summer, Liam, Lily and Neveah; a sister, Janice (David) Dickie and families as well as good friends, Cheryll Norwood and Ron and Joyce MacDonald. She was predeceased by her husband, Bob and parents, Ernest and Hilda Weagle. The Funeral Service will be held at the Salvation Army Corps, 164 Stratton Way S.E., Medicine Hat on Friday, October 20, 2017, at 10:30 a.m. with Captains Ron and Joyce MacDonald officiating. Interment will follow at Hillside Cemetery. (Condolences may be expressed by visiting our website at www.cooksouthland.com) Memorial donations in Lucille’s name may be made directly to the Salvation Army, 164 Stratton Way S.E., Medicine Hat, Alberta, T1B 3R3 or to the Kidney Foundation of Canada, 6007 – 1A Street S.W., Calgary, Alberta, T2H 0G5. Honoured to serve the family is