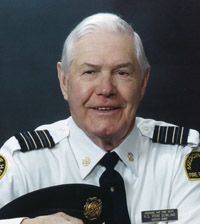 Ronald “Ron” Stanley Dowling of Medicine Hat, beloved husband of the late Marie Dowling, passed away on Monday, October 30th, 2017 at the age of 83 years. Ron leaves to cherish his memory one son, Jeff (Renee) Dowling; one daughter, Terry (Allan) Schritt; three grandchildren, Derek Dowling (Jessica Van Soest), Bryan Dowling and Angela (Kevin) Guinn; one great grandchild, Brooklyn Dowling; one sister, Joyce (Raymond) Quast; one niece, Candace; and best friends, Ray (Gertie) Nesting and Glen Loewen. Ron was predeceased by his wife, Marie Dowling; his dear friend and companion, Charlotte Hartley; his parents, Stanley and Grace Dowling; and one nephew, Ross Quast. Ron loved his family, his friends, his big brick house and his antique vehicles. He proudly served the City of Medicine Hat Fire Department as Deputy Fire Chief for Inspections until his retirement in 1994. He participated in car shows and parades with his antique cars and rode with the MHVVC Club on the Web ladder truck often. He enjoyed camping with his van at Rattlesnake and flying to Arizona for little winter holidays in recent years. He attended his grandchildren’s events and sporting activities and enjoyed helping out at Jeff and Renee’s acreage. Coffee at A&W was his morning routine. His home was his passion and he kept it just the way he wanted it. Sadly, he succumbed to a functional decline in health. Those wishing to pay their respects may do so at SAAMIS MEMORIAL FUNERAL CHAPEL, on Thursday from 7:00 until 9:00 p.m. and on Friday from 10:00 a.m. until 1:25 p.m. The Funeral Service will be held at SAAMIS MEMORIAL FUNERAL CHAPEL, on Friday, November 3rd, 2017 at 1:30 p.m. with Gary W. Goran officiating. Interment will follow at Hillside Cemetery. In lieu of flowers, memorial gifts in Ron’s memory may be made to A.J.‘s Loan Cupboard, P.O. Box 45006, MacKenzie Drug Post Office, Medicine Hat, AB, T1A 0B1 or to the charity of one’s choice. Condolences may be sent through www.saamis.com or to condolences@saamis.com subject heading Ronald Dowling. Funeral arrangements are entrusted to