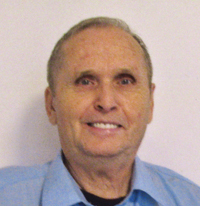 Russel Daniel Balaberda, beloved husband and best friend of Donna Balaberda (nee Schafer) of Medicine Hat, passed away on Saturday, October 28th, 2017 and left this earth to be with his Lord and Saviour Jesus Christ. Russel made a personal commitment to accept Jesus Christ as his Saviour. He battled cancer for the last five years which in the end took his arm and his heart. He fought a hard battle to the end and now has gone home to be with his heavenly Father. Russel was born in Saskatchewan and was raised on a farm near Fenwood. He worked 33 years in the Boilermakers Union as a Welder and then worked 10 years for the City of Medicine Hat at his retirement job which he loved. Russel was predeceased by his parents, Joseph and Mary; as well as his brother, Raymond. He is very thankful to God for giving him his wife, Donna, who was the love of his life, best friend and most of all his earth angel who took care of him in his time of need. Russel also leaves to mourn his memory his two daughters, Suzanne Jones (Paul Deminick) and Joanne (Ray) Gow; five grandchildren; three great-grandchildren; one brother, Gerald (Linda); two sisters, Rita (Henry) and Beverly (Keith); and one sister-in-law, Julie. Good-bye to a loving husband, father, grandfather and great-grandfather. We will always love and miss you until we meet again. A special thank you to Dr. Duke, Dr. Lategan and all the other doctors and nurses who took care of him during his illness. The Memorial Service will be held at THE CHURCH OF CHRIST, 655 Stewart Drive NW, on Saturday, November 4th, 2017 at 11:00 a.m. with Pastor Jamie Lobert officiating. A Private Interment will take place at Hillside Cemetery. In lieu of flowers, memorial gifts in Russel’s memory may be made to the Medicine Hat & District Food Bank Association, 532 South Railway Street SE, Medicine Hat, Alberta, T1A 2V6. Condolences may be sent through www.saamis.com or to condolences@saamis.com subject heading Russel Balaberda. Funeral arrangements are entrusted to