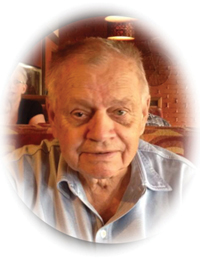 Stephen “Steve” Soltis of Medicine Hat, beloved husband of the late Irene Soltis, passed away on Wednesday, November 1st, 2017 at the age of 91 years. Steve leaves to cherish his memory his children: Faye (Jerry) Zahn of Medicine Hat and their children, Corinna (Ken) Wuitchik and children, Jessie (Erin) and Miller (Megan), Denise (Rob) Rehm and children, Abby (Connor), Brianne (Blythe), and Jayke; Don (Sandy) Soltis of Medicine Hat; Debbie (Harold) Motz of Medicine Hat and her son, Christopher Morrison and her step children, Ryan (Cara), Janine (Frank), Julie, Tenille, and Takara and their families; Murray (Janine) Soltis of Morden, Manitoba and their children, Finn and Sawyer; two brothers, Harvey (Joan) Soltis and Ed (Mary) Soltis; as well as numerous nieces and nephews. Steve was predeceased by his wife, Irene; and his parents, Steve and Mary. Steve came to Canada when he was three years old and lived in Northern Alberta. He joined the Canadian Army and was a guard at a Prisoner of War Camp in Medicine Hat where he met his wife. He later received his journeyman certificate in Edmonton. Steve returned to Medicine Hat and worked at Benny Motors and then for the City of Medicine Hat where he spent 30 years before retiring in 1990. Steve enjoyed travelling and spending time with his dog, T-bear. He was always busy maintaining his property and staying active. Steve will be greatly missed by his family and friends. The Funeral Service will be held at SAAMIS MEMORIAL FUNERAL CHAPEL, #1 Dunmore Road SE, on Monday, November 6th, 2017 at 11:00 a.m. with Life Celebrant Lynett Getz officiating. A Private Interment will take place at Saamis Prairie View Cemetery. Memorial gifts in Steve’s memory may be made to the Medicine Hat Food Bank, 532 South Railway Street SE, Medicine Hat, Alberta, T1A 2V6. Condolences may be sent through www.saamis.com or to condolences@saamis.com subject heading Steve Soltis. Funeral arrangements are entrusted to