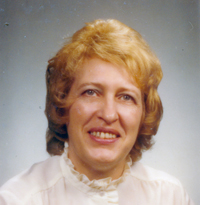 It is with profound sadness that we, the family of Gudrun Julie Armstrong, announce the passing of our beloved mother, grandmother, great-grandmother, sister and friend. She passed away peacefully at the Medicine Hat Regional Hospital on Monday, November 6, 2017, at the age of 83 years. Julie is the loving mother to Gabriela (Arthur) Culligan; grandmother to Jesse and Katrina; great-grandmother to Jenessa, Emily and Felix as well as a special friend to many in the Redcliff and area community. Julie is also survived by one brother and his family, Gunter Eisele of Germany. She was predeceased by her parents, Ernst and Frieda Eisele, as well as one brother, Dieter Eisele. Julie was born in Germany on September 10, 1934. This is also where she was raised and received her education. In 1952, she emigrated from Germany and made her home in Australia. In 1969, Julie immigrated to Canada, settling in Kitchener, Ontario where she made many good friends. At the age of 72, she moved to Redcliff where she continued to reside until her passing. She enjoyed spending time with her family and playing cards at the Redcliff Senior’s Centre with some of the many good friends she made over the years. In honour of Julie’s wishes, her life will be silently remembered without the proceedings of a formal service. (Condolences may be expressed by visiting our website at www.cooksouthland.com) If friends so desire, memorial tributes may be made to the Canadian Diabetes Association, 204, 2323 – 32 Avenue N.E., Calgary, Alberta, T2E 6Z3 or to the Medicine Hat SPCA, 55 Southwest Drive S.W., Medicine Hat, Alberta, T1A 8E8. Honoured to serve the family is