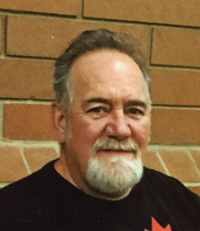 It is with great sadness that the family of Lawrence Anthony “Tony” Smale announces his passing after a brief battle with cancer on Wednesday, November 15th, 2017 at the age of 59 years. Tony leaves to cherish his memory his mother, Lucy Smale; his daughter, Oralee Smale; his step-daughter, Tessa Desroche; his step grandchildren, Evan and Jayla; his sister, Tracy Pedersen; his God daughter, Danielle (Mark) O’Brien and their children, Kaysen, Kashton, and Keegan; his uncle Len (Cindy) Mann; his special cousin, Darlene; Keath Blaeser, who was like a brother to Tony; as well as numerous aunts, uncles, cousins and friends. Tony was predeceased by his father, Lawrence Smale; his brother-in-law, Karsten Pedersen; his nephew, Derrick Pedersen; his uncles, Will, Lyle and George; and his aunts, Betty and Eva. Tony was born in London, Ontario where he received his early education. He moved to BC in 1968 and attended school in Delta. Tony worked in the mills in BC and Northern Alberta for many years. He had his own auto parts business in Bashaw, Alberta, and drove cement truck near Camrose until his disability forced him to retire. It was at that time that Tony moved to Medicine Hat. He enjoyed playing crib at the Strathcona Centre and exercising at the YMCA. He loved spending time with his family and friends. Tony was an animal lover and enjoyed his motorcycle as well as classic cars and trucks. A Graveside Service will be held at a later date in Creston, BC. Memorial gifts in Tony’s memory may be made to the Canadian Cancer Society, 325 Manning Road NE, Calgary, Alberta, T2E 2P5, to Brain Injury Relearning Services, 856 Allowance Avenue SE, Medicine Hat, Alberta, T1A 7S6, or to the Seniors Outreach Services, c/o Medicine Hat Regional Hospital, 666 – 5th Street SW, Medicine Hat, Alberta, T1A 4H6. Condolences may be sent through www.saamis.com or to condolences@saamis.com subject heading Tony Smale. Funeral arrangements are entrusted to