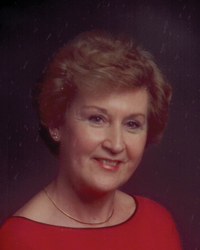 On Saturday, November 25, 2017, Mrs. Margaret Dolores Sparrow of Oliver, BC passed away peacefully at Sunnybank Centre at the age of 92 years.

Margaret was born Marjorie Deloris Leidal on September 15, 1925, in Hilda, Alberta. After graduating from High School, Marge attended Henderson Secretarial College, then worked at Beny Motors in Medicine Hat until she married Jack Sparrow in 1948 and they moved to Calgary where Jack was a locomotive fireman with the Canadian Pacific Railway. About this time, her name was legally changed to Margaret Dolores Sparrow, due to a paperwork error when the marriage was registered. Marge embraced the change and began going as Marg to her new friends in Calgary.

Margaret suffered a small stroke in 2012 and had two major strokes while she was at Sunnybank Centre in Oliver, where she passed away peacefully with her only child, daughter Maureen by her side on November 25, 2017.

Margaret is survived by one sister, Doreen Butgereit in Medicine Hat, Alberta, one daughter, Maureen Sparrow of Oliver, BC, 3 grandchildren, Erika Janz of Darwell, Alberta, F. Kevin Janz of Consecon, Ontario, and Alexis Erickson of Calgary, Alberta. She is also survived by 3 great granddaughters, Molly Janz, Georgia Janz, and Bonnie-Rose Janz, as well as many nieces and nephews and great nieces and nephews.

Condolences and tributes may be directed to the family by visiting www.nunes-pottinger.com