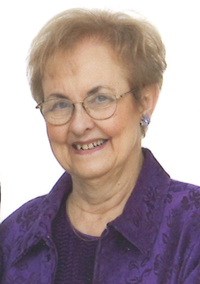 Mrs. Marjorie Katherine Wehlage of Milk River, beloved wife of Elmer, passed away peacefully, surrounded by her family on November 30, 2017 at the age of 83 years. Marjorie was born on November 28, 1934 in Lethbridge. She was the eldest of six children and the only daughter. She received her first eleven years of education at the Hoping School and grade twelve at St. Theresa Academy in Medicine Hat. She received her Secretarial Clerical Diploma from Garbutt’s Business College in Medicine Hat and worked at the main office at St. Michael’s Hospital until 1955 and then Purity Dairy until she married Elmer on October 12, 1957. They resided in the Masinasin area where they purchased the original Wehlage farm and worked a mixed farm until 1966 and then bought and moved to Wendelin Harty’s farm. She had four children, keeping very busy with 4-H, music, swimming and various sports. She canvassed for Cancer and Red Cross, was a member of the CWL, taught cathecism and helped with various community functions for many years. She loved her vegetable and flower garden and was known for her delicious pie crusts, cinnamon buns and angel food cakes. She had very strong faith and always had a kind word or a laugh for anyone who needed it in good or bad times. She enjoyed spending time with her family numbering 39 at her passing and was very proud of her children, grandchildren, great-grandchildren and one great-great-grandchild. Her most recent grandchildren, Brylee and Kinlee brought her special joy in her later years. She was predeceased by her parents John and Rose Harty, and sister-in-law Bernice Harty. Her in-laws Anton and Anna Wehlage, brother and sister-in laws from the Wehlage family. She is survived by her husband Elmer of 60 years, her children Wanda (Dave) Erickson, Leanne (Faron) Ellis, Chris (Shari) and Byron (Jodie) Wehlage. She had 10 grandchildren, 10 great- grandchildren and 1 great-great- grandchild. Her brothers Richard (Gladys), Ron (Sylvia), Michael (Joanne), Bruce (Kathy) and Leslie (Ann) Harty, her special niece Linda Obrigewitch as well as numerous nieces, nephews, their families, special neighbours (Colleen and Glen Pittman) and many friends. Marjorie will forever be in our thoughts, prayers and in our hearts. Vigil Rites (Prayers) will be held at 7:00pm on Monday, December 4, 2017 at the ST. PETER’S CATHOLIC CHURCH, 321 Main Street North, Milk River. A Funeral Service will be held at 11:00am on Tuesday, December 5, 2017 at ST. PETER’S CATHOLIC CHURCH, Milk River. A private family burial will follow in the Allerston Cemetery. In lieu of flowers, donations may be made in Marjorie’s name to the Heart and Stroke Foundation of Alberta, Box 2211, Lethbridge, Alberta, T1J 4K7 or another charity of your choice.