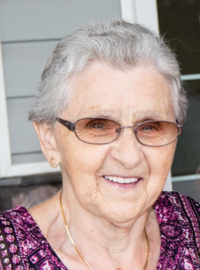 Irene will be remembered as a true caregiver and will be sadly missed by all who knew her. Her love of God and her desire to go home was realized on Monday, December 4, 2017. Irene leaves to cherish her memory her daughter Marlene Schaupp of Medicine Hat; her four grandchildren, Sherry (Dan) Martindale, Christy (Mel) Weeks, Cameron (Patricia) Straub, and Curtis Straub; her great grandchildren, Kaiden, Shaylin, Logan, Larissa, Johnathan, Jaiden, Kirsten, Alisha and Seth; one brother, Milbert Schock of Moose Jaw, SK; one sister, Mayda Kallis of Seattle, WA; as well as numerous nieces and nephews. Irene was predeceased by her daughter, Anita; and a grandson, Christopher; three brothers, Jacob Schock, John Schock, and Adolf Schock; four sisters, Gilda Amman, Edna Prigotzke, Martha Trithardt, and Hurtha Schock; as well as numerous nieces and nephews. There will be a Private Time of Remembrance held. Memorial gifts in Irene’s memory may be made to The Gideons International, Suite 177, 1415 – 28 Street SE, Medicine Hat, AB, T1A 8P9 or to Hillcrest Evangelical Church, 3785 13th Avenue SE, Medicine Hat, Alberta, T1B 1J2. Condolences may be sent to www.saamis.com or to condolences@saamis.com subject heading Irene Schaupp. Funeral arrangements are entrusted to