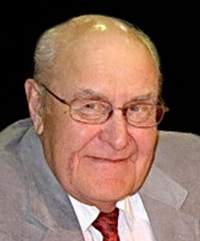 Alfred Janke of Brooks, beloved husband of Freda Janke and the youngest child of Jacob and Lydia Janke, passed away in Brooks on Friday, December 8th, 2017 at the age of 84 years. Alfred was born in Norton, Alberta on August 28th, 1933. He received his education at Krauss School a half mile from where he spent the first 19 years of his life and he often shared many special memories of growing up in that area and attending school there. Alfred went on to work at the Dominion Glass Factory in Redcliff and B.C. Pea Growers in Medicine Hat, but it was the fall of 1952 when he helped harvest at Robert Seefried’s in Bowell, that he met his future wife Freda Seefried. And although Alfred was already farming west of Brooks, Freda joined him after they were married on June 9th, 1956 in Medicine Hat and they started their life together. They welcomed two daughters, Carol in 1958 and Kathy in 1963. They raised their daughters and continued farming in the close-knit community of Antelope Creek, until they retired in 1995 moving into Brooks after building their retirement home. Alfred always enjoyed curling, playing cards and getting together with neighbors and friends. In 1973 Dad became a star, when he played a role in Richard Burton’s Documentary called “The Last Spike”. After retiring, he took up wood working and golf, spent more time playing the guitar and mouth organ as well as singing and enjoying coffee with friends and relatives, but his greatest joy was spending time with his family and especially his three grandchildren. Alfred was a member of the Brooks Seniors Outreach, Prairie Pioneers, The Warblers and remained active in the Brooks Evangelical Free Church, which he helped build. Alfred and Freda often enjoyed singing at Church in the Newbrook Lodge, Sunrise Gardens and Orchard Manor in Brooks. In the earlier years they travelled to Disneyland and after retiring took many bus tours venturing as close as Calgary, Lethbridge and Rosebud, Alberta and as far as Minot, North Dakota, Branson, Missouri and Las Vegas, Nevada. Dad had a wonderful sense of humor and loved to laugh. He was an excellent husband, father, grandfather, and Alfred was always willing to lend a helping hand to anyone in need. Alfred is predeceased by his parents three sisters, Emma Janke, Christina Kelm and Irene Seefried; four brothers, Gustaf, Arthur, Reuben and Emil Janke. He is survived by his loving wife Freda of 61 years; two daughters Carol Janke of Brooks and Kathy (Brian) Chornoby of Medicine Hat; 3 grandsons, Brandon, Tyler and Jamie Chornoby; one brother, Jack Janke and numerous other family members. Funeral services will be held on Wednesday, December 13th at 1:00 PM from the Brooks Evangelical Free Church. Pastor Garth Everett officiating. Interment to follow at Brooks Cemetery. In memory of Alfred, if friends desire, memorial tributes may be made to Brooks and District Health Foundation for Dialysis Machine, Bag 300, Brooks, Alberta T1R 1B3.

One Condolence for “Janke”