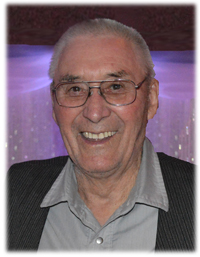 Andre Joseph Alphonse Morisseau passed away peacefully at the Medicine Hat Regional Hospital with his family by his side on Thursday, December 7, 2017, at the age of 86 years. Left to cherish Andre’s memory are his children, Linda Seitz (Eric Andersen), Lorne (Helga) Morisseau, Brenda Morisseau (Bruce Riley), Bev Morisseau (Guy Lacasse), Larry (Marcella) Morisseau, Doreen (Rud) Henderson and Doris (Rob) Gillis; nine grandchildren, Troy, Tannis (Eddie), Taralee (Carmen), Marquel, Celine, Desirae, Alisha (Ryan), Cameron (Amourin) and Conrad as well as six great- grandchildren, Austin, Zaiden, Axel, Zaxton, Emma and Ashlynn. Andre is also survived by his sisters, Lyla, Alice (Don), Theresa (John), Madeline and Jeanne; brothers, Peter (Myrna) and Romeo (Louise) and family friends, Garth (Marilyn) Seitz and Crystal Gomke. Andre was predeceased by his children’s mother, Sandra Morisseau and his sister, Claudette (George). Those wishing to pay their respects may do so at Cook Southland Funeral Chapel, 901 – 13 Street S.W., Medicine Hat on Friday, December 15, 2017, between noon and 12:40 p.m. A Graveside Celebration of Andre’s life will follow at 1:00 p.m. at Hillside Cemetery with Pastor Clarence Knodel officiating. Those attending the graveside service should gather at Cook Southland Funeral Chapel between noon and 12:40 p.m. as the procession to Hillside will start at 12:45 p.m. In lieu of flowers, memorial donations in Andre’s name may be made to the charity of one’s choice. (Condolences may be expressed by visiting our website at www.cooksouthland.com). Honoured to serve the family is