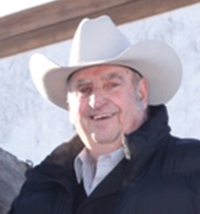 It is with heavy hearts that the family of Roy David Cowie announce his passing at the Medicine Hat Regional Hospital on Saturday, December 9, 2017, at the age of 74 years. Roy was born March 12, 1943, in Lethbridge, one of nine children born to Allan and Evelyn Cowie. He was raised on the family farm near Foremost where he developed his love for the country way of life. He moved to Calgary before making his way to Medicine Hat when he accepted a job as a brand inspector. He enjoyed dancing, going to rodeo’s, playing guitar and singing. Roy enjoyed many road trips with Kim and spending time with family and friends. He especially loved spending time at Kim’s acreage where he would putter around fixing things and watch the horses. He truly enjoyed the peace of the country. Roy will be deeply missed by his daughters, Kim Cowie and Shawna (John) Cordara as well as four grandchildren and two great- grandchildren. He is also survived by his siblings, Lloyd (Pat) Cowie, Florence (Richard) Beringer, Elaine (Ken) Haaf and Wayne (Grace) Cowie; nieces, nephews and many special friends. He was predeceased by his parents, Allan and Evelyn; three sisters, Phyllis, Margaret (Joe) Bernhardt and Thelma (Fred) Lorentzon and a brother, Dale Cowie. Those wishing to pay their respects may do so at Cook Southland Funeral Chapel, 901 – 13 Street S.W., Medicine Hat on Thursday, December 14, 2017, from 7:00 pm to 8:00 p.m. and again on Saturday, December 16, 2017, from 3:00 p.m. to 4:00 p.m. No formal funeral service will be held. (Condolences may be expressed by visiting our website at www.cooksouthland.com) Memorial donations in Roy’s name may be made directly to the Canadian Cancer Society, 200, 325 Manning Road N.E., Calgary, Alberta, T2E 6Z3. Honoured to serve the family is