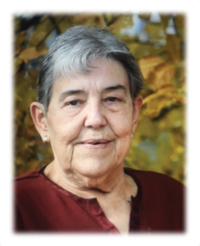 Evelyne Merle Tooth passed away while surrounded by family on Wednesday, December 13, 2017, at the age of 79 years. Left to cherish and honour her memory are her children, Linda (Duncan Davies), Jeffrey and Randy (Barb); grandchildren, Kayla and Melissa Tooth, Sabrina Tooth and Nicholas and Alexander Davies; brother, Norm (Adrienne) Hunchuk, sister, Arlene (Dennis) Houghton and sister-in-law, Jean Tooth as well as numerous cousins, nieces and nephews. She was predeceased by her husband, Harold in November of 2012; brother, Keith and parents, William and Evelyne Hunchuk. Merle was born in Cumberland, British Columbia on September 18, 1938. The family relocated to Moose Jaw, Saskatchewan where she attended and graduated high school. It was in Calgary where she met Harold and they married in 1964. In 1968, they moved to Medicine Hat to raise their children. She was a proud and honourary member of the Oil Wives Club of Medicine Hat. In her spare time she enjoyed crossword puzzles, reading her kobo and watching sports. Her favourite teams were the Toronto Blue Jays, Saskatchewan Roughriders and the Calgary Flames. As per request, Merle’s life will be silently remembered without the proceedings of a formal service. (Condolences may be expressed by visiting our website at www.cooksouthland.com) Memorial donations in Merle’s name may be made directly to St. Joseph’s Home Carmel Hospice, 156 – 3rd Street N.E., Medicine Hat, Alberta, T1A 5M1. Honoured to serve the family is