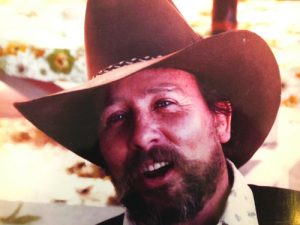 With deep sadness, the family of Robert (Bob) Walter Cathcart wish to share, that on November 2, 2018 Bob took his place among those who have gained an ‘outside perspective’ on the life we have come to know on this earth. While it is sadness we feel in our hearts, it was relief to our Dad, Brother, Uncle, Granddad when his need to conclude his time here among us, was honoured.

Bob, otherwise affectionately known as ‘Buddy, Cowboy Bob, Flop or Floppy’, had a radiance that very naturally drew many people into his life. Throughout his numerous careers (predominantly in mechanics, trucking and servicing in the Alberta oil patch industry), Bob made fast friends. It can safely be said, that if you had a friend in Bob then you made a friend for life, as his sense of loyalty ran deep. His infectious laughter and rich humour, offered people fortunate enough to be around Bob, a ‘lighter load’. Where things had a tendency to turn more serious or tense, was generally regarding the latest ‘bafoonery’ that the government of the day might be displaying. There was often no love lost on the ‘powers that be’, which Bob keenly announced through his years of labour activism, fighting for ‘what was fair, right and just’ in the workplace or in seeking compensation in times of need.

With that, keeping things light was highly valued to Bob. This could easily be achieved through simply sitting down to a conversation or good game of cribbage. He was an easily satisfied man, never expecting more than what was reasonable. His good nature, happy disposition and love for life, friends and family was evident to the end and we are deeply grateful for the time we were able to share with him in his closing days.

The family respectfully requests that any financial memorial be directed to an association whose focus is on assisting in the treatment of diabetes. While the family will hold a private memorial, we are confident Bob’s life will be celebrated for many years to come as people recount the beautiful ways ‘Buddy, Cowboy Bob, Flop or Floppy’ wove his way into their lives.

Rest well Dad, Brother, Uncle, Granddad and Friend, you have fought your fight, lived, loved, laughed and now we will carry your light in our hearts always.