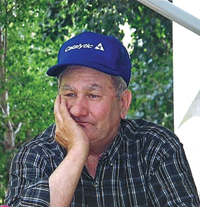 The family of Harvey Anhorn would like to share that he passed away on December 2nd, 2018 peacefully and comfortably cared for by the wonderful staff at Masterpiece Southlands.

Harvey’s joy was evident when surrounded by family. Serving up a roaster full of cabbage rolls, pickling beets or guiding the casings while the sausage press turned out 100’s of pounds of frying sausage for family and friends, Harvey’s ‘love language’ was food. Nothing said ‘I Love You’ more than a gallon of his homemade Borscht.

Being born into a farming background Harvey’s heart always yearned for the land. His love and respect of the prairie ran through his veins. To be hot and sunburnt, spending the day on a hard metal tractor seat, produced a dusty smile and the feeling of a job well done. Once those around Harvey became aware of his affinity for cooking, his place on the field quickly turned to “Cookie” for the thrashing crews!

The livestock left under Harvey’s charge were some of the happiest characters to ever be known. There was Charlotte, the prized ‘Sow’ who demanded her ‘belly rub’ with an oak post every morning. Tina the Holstein who only had eyes for Harvey. Pausing to stop and peer into the front window, she would wait to accompany Harvey to the barn for milking. The two of them then walking side by side, in morning conversation; was a picture we will treasure forever.

Though physically frail in the end Harvey recounted many stories, all of which we will miss. But we are satisfied and comforted in knowing our Dad answered the most important invitation.

My heart has heard you say;

“Come and talk with me.”

And my heart responds;

Those wishing to pay their respects may do so at SAAMIS MEMORIAL FUNERAL CHAPEL, 1 Dunmore Road SE, on Thursday, December 6th, 2018 from 7:00 p.m. until 9:00 p.m. A private graveside service will take place at Saamis Prairie View Cemetery. In lieu of flowers, memorial gifts in Harvey’s memory may be made to the Champion Centre, 435 North Railway Street SE, Medicine Hat, Alberta, T1A 2Z3. Condolences may be sent through www.saamis.com or to condolences@saamis.com subject heading Harvey Anhorn. Funeral arrangements are entrusted to