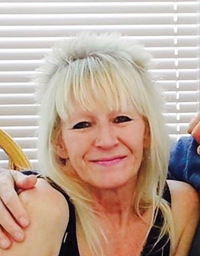 It is with profound sadness that we announce the passing of our beloved Sally Frances Wentworth (nee Dexter) of Medicine Hat, on Monday, December 3rd, 2018 at the age of 68 years. Sally leaves to cherish her memory her father, Geoffrey Dexter; two sons, Ashley Dexter and Leigh (Ruth) Bevington; three grandchildren, Matthew Bevington, Morroco Johnson and Logan Dexter- Goddard; two brothers, Christopher Dexter and Steven (Kieu) Dexter; one sister, Louise Dexter; numerous nieces and nephews; beautiful God Children, Braxton and Keaton; her many devoted friends; and many special ‘fur babies’. Sally was predeceased by her daughter, Lara Dexter in 1985; mother, Ada Dexter in 2010; and her nephew, Jamie Dexter in 2015. Sally was born in Sheffield, England on May 22, 1950. She immigrated to Canada with her parents, at the age of 5 years, first settling in Edmonton and then later in the N.W.T. As a young woman she started her career as a hair stylist and she opened her very first shop in Fort Smith called “Camelot”. Through her years, Sally lived in various places and worked in many different careers including real estate and bookkeeping. She taught hairdressing at the Mavvel Beauty School in Saskatoon and then moved to Jasper to work in the local barbershop. She loved the laidback atmosphere and the people that she met while working in the small community. “Sal” moved to Medicine Hat in 2010 to help care for her parents. She and Dad were a great team and helped each other immensely. She devoted her life to the care of animals. She ran the Furry Friends Foundation for a number of years, helping those that were less fortunate and were unable to feed their beloved cats and dogs. Her love of animals went above and beyond, as was her love of people. Sal always put others needs ahead of her own. She will be deeply and sadly missed by all who knew her. A Celebration of Sal’s Life will be held at SAAMIS MEMORIAL FUNERAL CHAPEL, 1 Dunmore Road SE, on Saturday, December 8th, 2018 at 1:00 p.m. with Captains Ron & Joyce MacDonald officiating. You may choose to wear Sal’s favorite color, purple, to the celebration. Memorial gifts in Sally’s memory may be made to the Furry Friends Food Foundation, 178 – 9th Street NW, Medicine Hat, AB T1A 5S3 or email furryfriendsfoodfoundation@gmail.com, or to the Medicine Hat S.P.C.A., 55 Southwest Drive SW, Medicine Hat, AB T1A 8E8 or to Alberta Pound and Rescue Centre (APARC), 1002 South Railway Street SE, Medicine Hat, AB T1A 2W2. Condolences may be sent through www.saamis.com or to condolences@saamis.com subject heading Sally Wentworth. Funeral arrangements are entrusted to