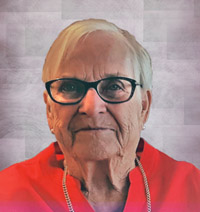 Thorson, Marilyn Ora of Bow Island, Alberta passed away peacefully at Bow Island Hospital on Sunday, December 16th, 2018 at the age of 83 years. The middle child of Alvin and Ora Johnson, Marilyn was born in Okotoks, Alberta on June 5th, 1935. From there, the family moved to the Winnifred area where Marilyn grew up on a farm with her siblings Lorraine (Cooper) and Shirley Ann (Mulner). Marilyn is survived by her loving husband, Ron; and her children, Deanna, Douglas, Barb and Darrel (Christina, nee Nezic). Marilyn was immensely proud of her children and her grandchildren, Todd, Jackie, Morgan, Stacy, Jimmy, Alexandra and Emily; and her great grandchildren, Ronin, Thoran, Dyson, Oliver, Harley and Belle. Marilyn was a lively and competitive spirit from her earliest days. An avid athlete with excellent grades, Marilyn was always out in the yard with her father, Alvin, playing “ball” whenever she could. After graduating from high school, Marilyn went to the Garbetts Business College and got her diploma there before commencing work at the Department of Agriculture in Medicine Hat. She started dating Ron shortly thereafter and they were married a few years later on March 4th, 1955. They moved to Ron’s family farmhouse near Winnifred and soon had four very active children in a house with no running water. Marilyn reminisced about getting up on a cold morning and having to thaw out the pot of water on the stove which had frozen solid overnight. But no matter for Marilyn. Her energy, relentless positivity and sheer will provided a wonderful environment for the children and their many friends. However, Marilyn did not let a busy lifestyle prevent her from her weekly trips to Medicine Hat to play ball and enjoy curling bonspiels and leagues whenever possible. As her children grew up and moved away, Marilyn continued on with her many activities and picked up golf and became a dedicated member of the Bow Island Golf Club. When she wasn’t golfing, curling, making deer sausage, canning fish or playing a competitive game of bridge, she convinced Ron to travel whenever possible. They took trips to Vietnam, China, Cuba, Australia, Mexico, Turkey, Europe and elsewhere and, in between, squeezed in their three month winter getaway to Arizona. Just in the last year, Marilyn and Ron took a cruise to Hawaii, took another cruise throughout the Baltic countries and squeezed in trips to Calgary, Kelowna and Texas. Whenever anyone asked Marilyn how she was doing, her standard response was “Busy! Is it Saturday already!!” Also an avid card player, Marilyn was well known for anticipating her opponents’ plays and making outrageous bids in bridge, smear and wist and, somehow always seeming to win. Marilyn’s zest for life was only exceeded by her generosity. Whenever a family member or friend needed help, Marilyn was always there. When Marilyn and Ron sold the family farm in 2016, it gave Marilyn tremendous satisfaction to help out her kids and grand-kids whatever the need. And last, regardless of the circumstances, she could never stop smiling and laughing. So, please, whenever you think of Marilyn, think of that big broad smile, that slightly irritating laugh and embrace life and love as strongly as she did. A Celebration of Marilyn’s Life will be held at ST. ANDREW’S UNITED CHURCH, 139 – 2nd Avenue West, Bow Island, on Saturday, December 22nd, 2018 at 11:00 a.m. with Pastor Lisa Waites officiating. Interment will follow at Bow Island Cemetery. Memorial gifts in Marilyn’s memory may be made to the Bow Island and District Health Foundation, P.O. Bag 3990, Bow Island AB, T0K 0G0. Condolences may be sent through www.saamis.com or to condolences@saamis.com subject heading Marilyn Thorson. Funeral arrangements are entrusted to