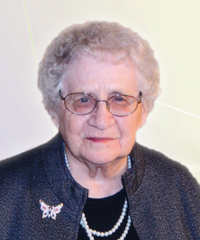 Esdela Herman, beloved wife of the late Wilbert Herman, passed away peacefully at the Riverview Care Centre in Medicine Hat, on Tuesday, December 18, 2018, at the age of 94 years. Esdela was a gentle, kind, loving mother who will be missed by all who knew her. She will be lovingly remembered in the hearts of her daughters, Beverley (Lenard) Stroh, Peggy Breakell (Joe Weisgerber) and Donna Jacober; grandchildren, Sheila, Karla (Gary), Brandi, Byron (Carrie), Darcy (Lisa), Darren (Carole), Doug (Karen), Lori (John); ten great- grandchildren, Abbi, Jake, Nate, Gage, Sara, Jaylin, Tyler, Ashley, Liz, and Teagan. Esdela was predeceased by her husband, Wilbert (2001); grandson, Blair Stroh (2017); sons-in-law, Ronald Draudson, Ron Breakell, Kenneth Zeller and Harvey Jacober. The Funeral Service will be held at Cook Southland Funeral Chapel, 901 – 13 Street S.W., Medicine Hat on Friday, December 21, 2018 at 3:00 p.m. with Major Murray Jaster officiating. A time of fellowship will follow in the Cook Southland Reception Facility. (Condolences may be expressed by visiting our website www.cooksouthland.com) If friends so desire, memorial donations in Esdela’s name may be made directly to the Riverview Care Centre, 603 Prospect Drive S.W., Medicine Hat, Alberta, T1A 4C2. Honoured to serve the family is