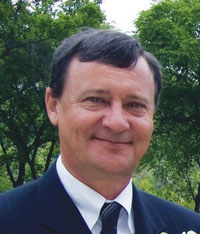 Les Phee, 64 years, husband of Murielle (Paulin) passed away at the Regina General Hospital December 4, 2018, surrounded by his family.

Les started his career with the Medicine Hat Police Services in 1978 and retired in 2003. Les and Murielle moved to White Rock, BC, in 2004 where Les began a second career with the BC government as a fraud investigator before retiring again in 2015 to spend more time with friends and family.