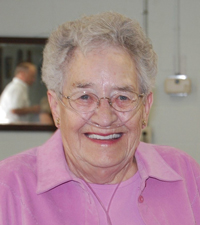 Pat was born in Trochu, Alberta to Myrtle and Gordon Witwer and raised on the family farm outside of Sunnyslope. She was the oldest of four girls, followed by Shirley, Elaine and Doreen. She always had a story to tell about living on the farm, usually involving the antics of four young girls and their pony but also about the hardships of the second world war and living through a polio outbreak.

In the late 1940s she met Albert “Ab” Baxter on a blind date and they were married on April 28, 1949. Together they raised seven children, Leslie, Danny, Brian, Brenda, Carol, Donald and Jim. They moved around Alberta and British Columbia as Ab followed work in the oilfield. Pat was a talented seamstress doing alterations for local dress shops and creating custom wedding gowns and hats. She enjoyed listening to live music whether it was Ab playing the saxophone at dances in the 1950s and 1960s or her son Jim playing local gigs in Medicine Hat many decades later.

After Ab passed away in 2000 she retired to Medicine Hat. She was often teased about being a bad cook and never denied it, but she always had a cup of tea ready for visitors, the dice ready for a game of Yahtzee and an old dog lying at her feet.

In Pat’s last years she coped with health issues that come with age and fought a stubborn battle with Alzheimer’s Disease. She passed away peacefully on the evening of December 24, 2018.

Along with her parents and husband, Pat was predeceased by her sister Doreen, grandchildren Chance, Aaron and Randy. She will be fondly remembered by those she left behind. At Pat’s request, there will be no funeral service.

We would like to extend our sincerest gratitude for the excellent care and compassion she received in her last years living at the Cypress View Foundation and to the nurses and doctors who helped her along in her last days at the Medicine Hat Regional Hospital.