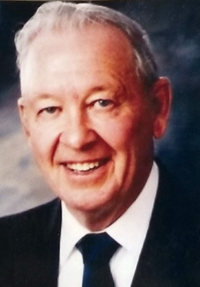 George Adam Borger of Medicine Hat passed away on Sunday, December 23, 2018, at the age of 89 years. He is lovingly remembered by his daughters, Janis (Terry) Mattheis, Holly (Everald) Olson; four grandchildren, Dr. Kelly Mattheis, Christy Mattheis, Everly (Neil) Larson, Chelsey (Steve) Kerr; five great grandchildren, Kobie, Kenzy, Kynlee, Jase and Pacey and numerous nieces and nephews. He was predeceased by his first wife, Marvis and his wife and companion in later years, Viola Wessner; his brother, Albert and two sisters, Ruth Schiebel and Edna Medaris. He was born in Loreburn, Saskatchewan, the youngest of four children and farmed in the area for many years until he and Marvis retired to Medicine Hat in the 70’s. In later years, they moved to Chinook Village and enjoyed the fellowship and community of many good friends. A graveside service will be held at a later date. As an expression of sympathy donations may be made to the Alzheimers’ Society of Medicine Hat or the MS Society of Canada. To e-mail an expression of sympathy, please direct it to: pattfh@telusplanet.net subject heading: George Borger, or you may visit www.pattisonfuneralhome.com and leave a message of condolence.