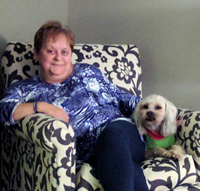 With heavy hearts, the family of Mona Frances Dobbin (nee Knox), beloved wife of John, announce her sudden passing on Friday, January 4, 2019, at the age of 65 years. Mona was born on January 18, 1953, the fifth daughter born to Frank and Monica Knox of St. Shotts, Newfoundland. She later became a big sister to Lorraine. Mona spent her years growing up in St. Shotts and then married the man of her dreams from St. Mary’s Bay, John Dobbin on February 27,1971. Together they built a home in Trepassey and had four wonderful children, Sonya, Johnny, Jeanette and Wanda. Mona spent most of her working career at the fish plant in Trepassey. When the fisheries ended she had no choice but to go be with her children in Alberta. Mona then worked at Lakeside packers for over 10 years. Just over 5 years ago, she found out she was in stage 4 kidney failure. Mona was a strong fighter who pushed through many ups and downs during her battle with this illness. The family would like to thank the chronic kidney unit at the Medicine Hat Hospital and Dr Ahmad. Left to mourn Mona is a large circle of family and friends: husband, John; children, Sonya (Craig), Johnny, Jeanette (Terry) and Wanda (Juan); five wonderful grandchildren, Kyler (Savannah), Jaxon (Sidney), Summer, Terri Lynn and Blake and very special puppy grandkids, Buddy and Kica; Macie and Finnix; sisters, Jose, Ange (Ren), Blanche (Des) and June; John’s family, Katherine, Margie, Randy, Cas, Mikey, Edwina, Irene, Rosemary, Phonse, Jo, Jim, Irene, Johnny and Terry. She is met in heaven by her mommy and daddy, Frank and Monica Knox; grandson, John; sister, Lorraine; nephew, Terry; in-laws, John and Kathleen Dobbin, Marie, Theresa, Anne, Georgina, Gerry, Harvey, Cliff and Ralph. Mona had a passion and love for bingo and everyone who knew her knows that. She spent her last years playing at Top Hat Bingo where she met many new friends. On January 18, which would have been her 66 birthday, cake will be served in her honour during Top Hat Bingo’s Intermission. Please come spend the evening in her memory and join us playing Bingo. Mona wished to be brought home to Newfoundland where she could rest in peace with her mom and dad. A small service will be held to honour her at St. Patrick’s Roman Catholic Church, 238 – 2 Avenue N.E., Medicine Hat on Friday, January 11, 2019, at 2:00 p.m. The family will honor her wishes and take her home with a burial to be held in her honor in Trespassey, Newfoundland at a later date. (Condolences may be expressed by visiting www.cooksouthland.com).

“I admired her not for her smile though it was beautiful.

Not for her eyes, though they shone brightly.

I admired her for her battle scars and war wounds

that she displayed proudly for the world to see.

I admired her for her strength and courage.”

Honoured to serve the family is