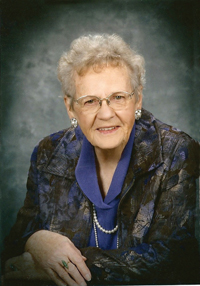 With sadness and sorrow, the family of Margaret (Peggy) Blanche Smith, beloved wife for 65 years of the late George (Al) Albert Smith, announce her passing on Saturday, January 12, 2019 at the age of 95 years. Peggy was born and raised in Indian Head, Saskatchewan and has been a resident of Medicine Hat, Alberta since 2002. She was the eldest daughter of four children born to the late Blanche and Thomas Rolfe. She took her secretarial training at Balfour Technical College in Regina and worked at the Saskatchewan Parliament in the Education Ministry as a typist and stenographer. Peggy and her friends loved to dance at the Trianon Ball Room and that is where Peggy met her future husband, Al. He was a flying instructor in Regina and they were married in the fall of 1944. After the war, Peggy and Al purchased the Air Service in Swift Current, Sask. and renamed it Smith Airways. Over the course of the following 30 years, Smith Airways was respected as a superior Air Service in Southwest Saskatchewan. It was a place where local pilots and travelers gathered, and Peggy, a pilot herself, always had the coffee pot on. Flying was Al’s passion, but it was Peggy who was the face of the business. Highlights, over their course of the years operating the business, included both the Saskatchewan and the International Flying Farmers Airport Operator of the year awards. After retirement, Peggy and Al spent many years as snowbirds in sunny Arizona and traveled extensively, in their motor-home, throughout North America. Many of their trips included visiting family and treasured time spent with their grandchildren and great-grandchildren. Peggy loved to sing and was an active member of the United Church Choir in Indian Head. She enjoyed socializing with friends and family, dancing, ceramics, crocheting, traveling, bible study and of course playing cards. Peggy will be missed by her family and friends and will always be remembered for her quick wit and her commitment to her family. Peggy is survived by her three daughters: Cheryl Pickett and her daughter, Amanda (Mike) Macdonald and their son, Cappur; and her son, Geoffrey; Penny Kerr and her daughters, Heather (Andreas) Rauscher and their sons, Carsten and Aiden, and Maureen (Brad) Hauck and their daughter, Willow; Doreen (Ron) Sitter and their family, Paul, Valerie (Cory) Pohl and their son, Revan, Victoria (Chris) DeVita and their children, Kassandra and Alexander, and James (Zemeta) Sitter and their daughters, Saba, Samra and Sofia. Peggy also leaves behind other family and friends including her sister, Joan Thompson, her sister-in-law, Joan Rolfe, and many nieces, nephews, cousins and a multitude of friends. Peggy was predeceased by her parents, Tom and Blanche Rolfe, her parents-in-law, William and Martha Smith; her sons-in-law, Fred Tarry and Dan Kerr; two grandchildren, Barbara Tarry and Michelle Kerr; her siblings, George Rolfe and Jack Rolfe, and her brothers-in-law, Don Thompson, Alan Smith and her sisters-in-law, Eileen Chouinard, Leona Sites. A Celebration of Peggy’s Life will commence on Thursday, January 17, 2019 at 3:00 p.m. at SAAMIS MEMORIAL FUNERAL CHAPEL, 1 Dunmore Road SE, with Pastor Lance Duncalfe officiating. A Graveside Service will be held in the spring at the Memory Gardens in Swift Current, Saskatchewan. In lieu of flowers, memorial gifts in Peggy’s memory may be made to the Medicine Hat Regional Hospital 5W, c/o Medicine Hat and District Health Foundation, 666 – 5th Street SW, Medicine Hat, Alberta, T1A 4H6, or to the Shriner’s Sick Children’s Travel Fund, WaWa Shriners of Regina, Shrine Centre, 2065 Hamilton Street, Regina, Saskatchewan, S4P 2E1. Condolences can be sent through www.saamis.com or to condolences@saamis.com, subject-heading Margaret (Peggy) Smith. Funeral arrangements are entrusted to