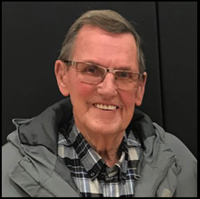 Trinus (Slim) Mulder of Medicine Hat went to be with the Lord on January 13, 2019, at the age of 76 years. Trinus, son of Heinze and Pietje, was born on November 9, 1942, in Hardegryp (Friesland), Holland. At age nine, he immigrated to Canada with his family. In 1966, he married the love of his life, Petronella den Hollander, and they were loving, remarkable spouses for 52 years. They were blessed with 4 children, Brian, David, Donna, and Brenda; 9 grandchildren; 1 great-granddaughter; 4 step- grandchildren, and 6 step-great-grandchildren.

Trinus and Nel worked side by side and built a wonderful, fulfilling life together. Trinus was known for being honest and hardworking in his work as a farmer, a drywaller, a real estate agent, home builder, and a businessman. Trinus, Nel and their family enjoyed many adventures together going for walks and drives, camping and traveling to many places. Prior to retirement, Trinus enjoyed his pets and yard and his first fish pond. In 2006, Trinus and Nel had the opportunity to build their retirement home. In retirement, Trinus golfed with family and friends, spent hours in his hobby plant room looking after his flowers, built his second fish pond, maintained a large, beautiful yard and was a friendly competitive bowler. Family and friends will especially remember Trinus for his bright smile, enthusiastic conversations and storytelling, playful energy, nature-loving, joke-telling, playing tricks, singing, intelligence, wisdom, generosity, and love. Trinus took great pride and joy in his grandchildren, showing them his yard and feeding the fish. His life was founded in the Christian faith; with his declining hearing, instead of going to church, Trinus could be found each Sunday morning watching Charles Stanley and Tribal Trails or listening to the Gaithers. Above all, Trinus was a devoted son, husband, father, grandfather, brother, uncle, and friend.

Family and friends will be celebrating Trinus’ life at Temple Baptist Church, 606 – 7 Street S.W., Medicine Hat on Saturday, January 19, 2019, at 2:00 p.m. with Pastor George Koopmans officiating. Luncheon will follow thereafter. In true Slim fashion, those attending the service are asked to wear jeans. Trinus and his family are greatly appreciative of the care provided by the staff at the University of Alberta Hospital and the Cross Cancer Institute in Edmonton. Condolences may be expressed by visiting www.cooksouthland.com. As an expression of sympathy, in lieu of flowers, donations may be made to: Tribal Trails (a First Nations Ministry with a message of Hope), P.O. Box 3030, Prince Albert, Saskatchewan, S6V 7V4. http://www.tribaltrails.org/. Honoured to serve the family is