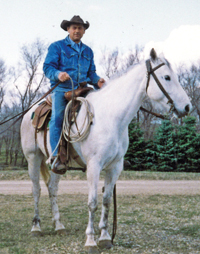 Louis Martin Seifert of Medicine Hat, Alberta and formally of the Hatton, Saskatchewan area, passed away at the Medicine Hat Regional Hospital on Tuesday, January 15th, 2019 following a brief illness. He is survived by his wife, Sandy and their children, Ardis (Wayne Terry) Lerner, Clint (Danette) Seifert, Heather (Warren) Belanger, Russell (Kristine) Crane and Jody (JP) Thibault and their families, his brother and sister in law, Herman and Marie Seifert, as well as a large extended family. He was predeceased by his parents, Martin and Mary Seifert and his sister and brother in law, Marie and Junior Einspahr. Louis was born in Medicine Hat and grew up and spent his career farming and ranching from the land that his father homesteaded in 1914 in the Hatton area. During these years he was very actively involved in activities in the rural area, the town of Maple Creek, the Province and the Lutheran Church. In 1992, he was awarded a commemorative medal for the 125th Anniversary of the Confederation of Canada by the Governor General in recognition of significant contribution to compatriots, community and to Canada. The Funeral Service will be held at ST. PAUL LUTHERAN CHURCH, 515 Sprague Way SE, on Tuesday, January 22nd, 2019 at 1:30 p.m. with Pastor Ken Edel officiating. Memorial gifts in Louis’s memory may be made to the Medicine Hat Regional Hospital Intensive Care Unit, c/o Medicine Hat and District Health Foundation, 666 – 5th Street SW, Medicine Hat, Alberta, T1A 4H6. Condolences may be sent through www.saamis.com or to condolences@saamis.com subject heading Louis Seifert. Funeral arrangements are entrusted to