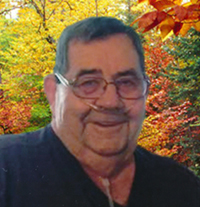 Thomas Delbert Collinge, beloved husband of the late Wilma Collinge, passed away at Sunnyside Nursing Home in Medicine Hat on Monday, January 21, 2019, at the age of 77 years. Tom will be lovingly remembered by his children, Brenda (Joe) Ridley, Mike (Christine) Collinge and Dee (Steve) Keats; grandchildren, Lance Ridley (Jessica), Renae Ridley (Cody), Stephanie Keats, Tyra Keats, Taija Haughian (Tony), Candice Peoples (Cody) and Courtney Peoples; siblings, Marvin (Liz), Alfred (Elle), Brian (Brigette), Barry and Sharon Reich (Perry); 11 great-grandchildren; brother-in-law, Bob (Linda) Laing as well as numerous nieces and nephews. Tom was predeceased by his wife, Wilma; granddaughter, Shania Keats; parents, Violet (Ed) Bunkosky and Kelly Collinge as well as nieces, Debbie and Teresa Collinge. Tom was born in Maple Creek, SK., on December 1, 1941, and lived in Redcliff for 52 years. He spent many hours hunting, fishing and camping, and in his younger years curling, darts and playing hockey. Tom was a member of the Redcliff Legion for 55 years and enjoyed his 3 o’clock happy hour wherever that may have been. He enjoyed spending time with his family but especially his time with his grandchildren. Those wishing to pay their respects may do so at Cook Southland Funeral Chapel, 901 – 13 Street S.W., Medicine Hat on Thursday, January 24, 2019, from 7:00 p.m. to 8:00 p.m. A Graveside Service will be held at the Redcliff Cemetery on Friday, January 25, 2019, at 2:00 p.m. A reception will follow at the Redcliff Legion, 302 Broadway Avenue West, Redcliff, with a short program commencing at 3:00 p.m. (Condolences may be expressed by visiting our website at www.cooksouthland.com) Honoured to serve the family is

One Condolence for “THOMAS COLLINGE”