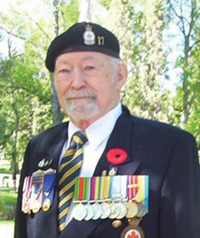 Geoffrey Henry Escourt Dexter passed away January 24, 2019 at the age of 91 years. Geoff will be lovingly remembered by all his family and many friends. He is survived by his son, Christopher Dexter, daughter, Louise Dexter, and son, Steven Dexter (Kieu) and grandchildren, Ashley, Leigh, Geoffrey, Reece, Anna, Mila, Kiara, and Scarlet, and great grandchildren, Morocco, Logan, Olivia, Reid and Avery. Geoff was predeceased by his granddaughter, Lara Dexter in 1986, Loving wife, Marie Dexter in 2010, Grandson, Jamie Dexter in 2015, and Daughter, Sally Wentworth in 2018. Geoffrey was born in London, England March 6th, 1927 to Henry and Doris. He had one brother, John and a sister, Ann (Dennis). He met his lovely wife Marie in the Airforce and the two were married in 1949. He was in the RAF and then the British Army. Geoffrey and Marie along with their first born Sally immigrated to Canada in 1956 starting a new life. He worked for the Canadian Army and then The Federal Government. Dad passionately dedicated much of his time to the Army Cadet Corps throughout many years. He had numerous hobbies and interests over the years such as a magazine editor, reading, writing, photography (winning the summer games in the mid 80’s), and lately spending many hours listening to numerous scientific Pod Casts on the internet to keep his mind sharp. He will forever be known for his quick Wit and outgoing personality. His humour was outstanding and lasted till the very end. He was a Korean Vet, a USI member and a Legion member. He and Mom met many wonderful friends through these associations. Dad loved all his family unconditionally and would do anything to help us out if needed. He taught us all so much by the way he lived his life with integrity, love, and humour. We will miss him tremendously. Geoffrey was definitely one of a kind. RIP Dad until we meet again xox. Those wishing to pay their respects may do so at SAAMIS MEMORIAL FUNERAL CHAPEL, 1 Dunmore Road SE, on Monday from 7:00 until 9:00 p.m. The Funeral Service will be held at the ROYAL CANADIAN LEGION, 702 – 2nd Street SE, on Tuesday, January 29th, 2019 at 2:00 p.m. with Lieutenant Kaitlyn Young officiating. Luncheon to follow. The officers and members of the Royal Canadian Legion, Robertson Memorial Branch #17 will conduct a Poppy Service for their departed comrade. A private interment will take place at Hillside Cemetery. Memorial gifts in Geoffrey’s memory may be made to the Royal Canadian Legion, 702 – 2nd Street SE, Medicine Hat, Alberta, T1A 0E1. Condolences may be sent through www.saamis.com or to condolences@saamis.com subject heading Geoffrey Dexter. Funeral arrangements are entrusted to