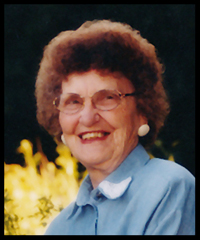 Mrs. Anita “Rusty” Regan, beloved wife of the late Mark Regan, passed away at the River Ridge Senior’s Village in Medicine Hat on Sunday, February 17, 2019, at the age of 89 years. Rusty was born on October 20, 1929, in Lake Lenore, Saskatchewan, a daughter to John and Frances Ryan. Rusty grew up in Lake Lenore before moving to Saskatoon where she received her schooling to become a nurse. It was during her time there, that she met her future husband, Mark. They spent their years together with their family, moving to numerous locations throughout Canada and Europe. During Rusty’s younger years, she enjoyed speed skating and danced whenever she could. Rusty was a loving, caring and hardworking lady and spent many dedicated years working at CFB Suffield. She was a wonderful cook and will be fondly remembered for her legendary cinnamon buns and delicious strudels! Rusty will be cherished in the hearts of her family including her children, Dawn Link, Tim (Donna) Regan and Tammi (David) Adams; 6 grandchildren, 5 great-grandchildren and a sister, Eileen Ryan. She was predeceased by a daughter, Wendy Roberts; grandson, Ian Roberts as well as her brothers and sisters.â€ˆThose wishing to pay their respects may do so at Cook Southland Funeral Chapel, 901 – 13 Street S.W., Medicine Hat, on Thursday, February 21, 2019, between 7:00 p.m. and 8:00 p.m. The Celebration of Life will be held at Cook Southland Funeral Chapel on Friday, February 22, 2019, at 2:00 p.m. with Reverend Father Tomy Manjaly celebrant. Interment will follow at Hillside Cemetery. (Condolences may be expressed by visiting our website at www.cooksouthland.com) Memorial donations in Rusty’s name may be made directly to the Alzheimer’s Society, 201, 770 – 6 Street S.W., Medicine Hat, Alberta, T1A 4J6. Honoured to serve the family is

One Condolence for “ANITA ‘RUSTY’ REGAN”