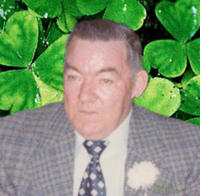 Mr. John French, beloved husband of Irene, passed away at the Good Samaritan Society Southridge Village in Medicine Hat on Friday, February 22, 2019, at the age of 87 years. Johnnie was born on the farm South of Consul, SK., on July 30, 1931, the third son to Patrick and Annie (nee Bell) French. He had two older brothers, Paddy and Joe. Johnnie was raised on the farm and attended “Spunky Puddle” School. At the age of 14 years, he went to work haying for Art and Mary Rotnem. He later bought a 3T truck which he hauled grain and cattle with before working a short time on the rigs. Johnnie then moved on to do road maintenance work for the L.I.D. and the Rural Municipality of Maple Creek for the remainder of his working career. He married Irene Stovka on December 22, 1956, in Havre, MT., and together they had two children, Gloria Lynn and Kenneth Gordon. They lived in Consul, SK., and retired to Medicine Hat in 1998. Johnnie lived at the Good Samaritan Society Southridge Village for the last three years and family are truly grateful for the care he received. Along with his loving wife, Irene, Johnnie is survived by: daughter, Gloria (Duane) Illerbrun; son, Ken (Brenda) French; Gloria’s daughters, Stephanie (Travis) Nelson, Melanie (Kyle) Stevenson, Kendra (Alex) Kinch; Ken’s sons, Jeff (Jessica) French and Blaine (Lisette) French; ten great-grandchildren; numerous nieces and nephews as well as five sisters-in-law, Saloma, Annie, Mary (John) Chuckry, Barb Hackman and Sherril (Gerry) Kukartz. He was predeceased by his parents, Patrick and Annie; brothers, Paddy and Joe; nephew, Billie; in-laws, Leslie, Larry, Don, Dale and Betty as well as two great-grandsons, Bodhi and Anthony Kinch. A Private celebration of Johnnie’s life will be held at a future date. Honouring his memory as pallbearers will be his grandchildren and their spouses and a special tribute to Grandpa will be shared by Stephanie Nelson. (Condolences may be expressed by visiting our website at www.cooksouthland.com). If friends so desire, donations in memory of Johnnie may be made to the CNIB, 102, 520 – 2 Street S.E., Medicine Hat, Alberta, T1A 0C6. Honoured to serve the family is

One Condolence for “JOHN FRENCH”