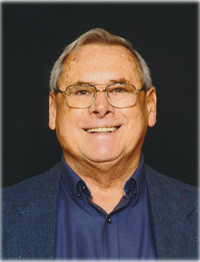 August 16, 1942 ~ February 24, 2019
It is with heavy hearts that the family of John “Jean” Leo Rocheleau, beloved husband of Colleen, announce his passing at St. Joseph’s Home – Carmel Hospice in Medicine Hat on Sunday, February 24, 2019, at the age of 76 years. John is survived by his loving wife, Colleen Rocheleau; daughter, Joanne Rocheleau (Stephen Deda); daughter-in-law, Sandra Rocheleau; six grandchildren; two sisters, Paulette Richer and Monique Wilson; three brothers, Philippe (Sandra), Guy and Leo (Marg) as well as numerous nieces and nephews. He was predeceased by his parents, Marcel and Fleurette (Flo) Rocheleau; a daughter in infancy, Lynn; a son, André Rocheleau in 2011 as well as in-laws, James and Agatha Donohue.  John was born in Ottawa, ON., where he lived until his family was transferred to Summerside, PEI. He joined the Air Force in 1961 and was posted to several bases across Canada. John married Colleen Judy Donohue on August 22, 1970, in Ottawa, ON. They made their home in Trenton, ON., where their children were born; Joanne in 1971, Lynn in 1974 and André in 1975. They lived in Victoria, B.C., Yorkton, SK. and worked at CFB Suffield until his retirement from the military in 1991. He continued to work for Canex for another 10 years before finally retiring in Medicine Hat in 2011. John loved fishing and hunting in his leisure time.  The Celebration of John’s life will be held at Cook Southland Funeral Chapel, 901 – 13 Street S.W., Medicine Hat, on Saturday, March 2, 2019, at 11:00 a.m. with a time of fellowship to follow in the Cook Southland Reception Facility. (Condolences may be expressed by visiting our website at www.cooksouthland.com). If friends so desire, memorial donations in John’s name may be made to the Margery E. Yuill Cancer Centre, payable to the Medicine Hat & District Health Foundation, 666 – 5 Street S.W., Medicine Hat, Alberta, T1A 4H6 or to the charity of one’s choice. Honoured to serve the family is