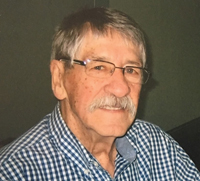 It is with heavy hearts that the family of Albert Ibach, beloved husband of Gwen, announce his passing at Southlands Masterpiece in Medicine Hat, AB on Tuesday, February 26, 2019 at the age of 80 years. Albert is survived by his loving wife, Gwen Ibach; son, Michael (Krista) Ibach; daughters, Cheryl McLeod (Blaine), Patricia Ibach, Joelene (Len) Blackman, Leanne (Conlie) Wilk, Carla (Graham) Brigden; 10 sisters; 5 brothers; 11 grandchildren; 2 great-grandsons; and numerous nieces and nephews. He was predeceased by his parents, John and Margaret Ibach; Gwen’s parents, Harry and Ida Gill; sister, Alma Ibach; and niece, Michelle Bachmeier. Albert was born and raised on the family farm in Fox Valley, SK. He was a man of many trades which included oilfield employment, small business ventures, electrical work, and working in the greenhouse. Everyone that knew Albert would understand his very unique personality. Albert’s greatest pride and joy were his grandchildren and great grandchildren. Those wishing to pay their respects may do so at SAAMIS MEMORIAL FUNERAL CHAPEL, 1 Dunmore Road SE, on Monday from 7:00 until 9:00 p.m. and at ST. PATRICK’S ROMAN CATHOLIC CHURCH, 238 – 2nd Avenue NE on Tuesday from 9:30 until 10:25 a.m. Vigil Rites (Prayers) will be held at SAAMIS MEMORIAL FUNERAL CHAPEL on Monday, March 4th, 2019 at 7:00 p.m. The Funeral Mass will be celebrated at ST. PATRICK’S ROMAN CATHOLIC CHURCH on Tuesday, March 5th, 2019 at 10:30 a.m. with Father Tomy Manjaly, Celebrant. Interment will follow at Saamis Prairie View Cemetery. In lieu of flowers memorial gifts in Albert’s memory may be made to the Alberta Heart & Stroke Foundation, 200, 119 – 14th Street NW, Calgary, Alberta, T1A 7L5. Condolences may be sent through www.saamis.com or to condolences@saamis.com subject heading Albert Ibach. Funeral arrangements are entrusted to