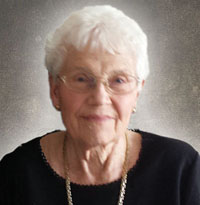 Violina Schneider, beloved wife of the late Hector Schneider of Medicine Hat, passed away on Tuesday, March 19th, 2019 at the age of 90 years. Violina leaves to cherish her memory her son, Doug Schneider (Nasim Karimi); daughter, Gerri Schneider; son-in-law, Brian Langevin; grandchildren, Josh Schneider (Brooke Knies), Jesse Schneider (Vicki Schira) and D-Jay Schneider; sister-in-law, Irene Eaton; as well as numerous nieces and nephews. Violina was predeceased by her son, Robert Dale Schneider, in infancy; daughter, Marilyn Langevin; her parents, Sidney and Augusta Eagle; and brothers, Jack (Maureen) Eagle and Tom (Mary) Eagle. Violina was born on April 26th, 1928 in Maple Creek, Saskatchewan and was raised in the Maple Creek district. She married Hector Schneider on June 30th, 1949 in Medicine Hat. Hector and Violina bought land in Maple Creek and created a successful purebred Hereford cattle herd for the next 25 years. In October of 1976 they sold the ranch and moved to Wetaskawin where Hector became a Hereford cattle promoter. In 1983 they moved to Medicine Hat and worked the purebred Hereford cattle circuit promoting the Hereford breed. Violina enjoyed playing bridge weekly with her friends in their private bridge club. She also followed Hector to as many events as possible. Violina took great pride in knitting and crocheting many items of clothing. A Private graveside Service was held at SAAMIS PRAIRIEVIEW CEMETERY yesterday. Funeral arrangements are entrusted to