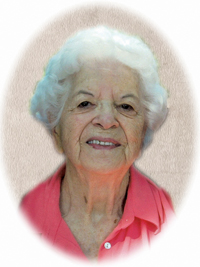 On Wednesday, March 27th, 2019 we lost a great lady who gave us all many good memories. Mary Schneider (nee Adel), beloved wife of the late Edwin Schneider, passed away at the age of 99 years. Mary leaves to cherish her memory her children, Ron (Lonnie) Snyder of Nelson, BC and Sharon (Alan) Penner of Medicine Hat; her four grandchildren, Todd (Patti†) of Kelowna, BC, Craig (Rhonda) of Medicine Hat, Brent (Zoe) of Cambridge, ON, and Gayle (Dave) of Calgary; her great grandchildren, Cole (Kelly), Landen, Blake, Ashton, Haleigh and Brayden; one great great grandchild, MacKinley Grace; her special sister-in-law, Gladys Schneider; as well as numerous nieces and nephews. Mary and Edwin also took two other children into their home and raised them like their own, Lillian (Don) Leathwood and Harold Andrews. Mary was predeceased by her husband, Edwin in 2002; her parents, Jacob Adel in 1947 and Regina Adel in 1949; five sisters, Elizabeth, Kathleen, Rose, Emma and Dorothy; five brothers, George, Edward, Jack, Ben and Ted; her husband’s parents, August and Kathleen Schneider; and all of her husband’s siblings, Leah, August, Lydia, Alma, Ida, Gordon, Esther and Archie. Mary was born on August 23rd, 1919 in Rosthern, Saskatchewan and moved to Medicine Hat as a youngster. She grew up in Medicine Hat and it was there she met and married Edwin and they moved to a farm 6 miles south of Irvine where they farmed until 1952 when they moved to Medicine Hat. Mary found employment at the Medalta Potteries in 1953 and worked there until she started work at the old Medicine Hat Hospital on the maternity floor. In 1956 she got a job at the Medical Arts Clinic where she did all their CSR supplies until 1980 when she retired in September. She loved her work at the clinic. Mary enjoyed the company of many pets, Tammy, Sumi, Mikie, Jiggs, Doogie, and any other that came her way. Some of the highlights in her life were seeing her grandchildren graduate and marry and seeing her great grandchildren grow-up. She also enjoyed her time with friends. Her and dad did many camping trips with the Redcliff Camping Club in their motorhome. They went to Hawaii, Vegas and she enjoyed time at her daughter and son-in-law’s cottage. When she moved into Chinook Village, she enjoyed social events with game nights and teas and just having coffee in the social room on her floor with many people who became good friends for 12 years. In February 2013 mom moved to the Valleyview because she needed more care and in December of 2013, she was moved into long term care. She received excellent care from all the nursing staff of the Valleyview who had also become part of her extended family. We would like to thank the recreation staff, especially Val, who is a volunteer at the Valleyview, because she always included her in all activities and became very special to our mom. As to her request, a Time of Celebration will be held at Hillside Cemetery for family and we will celebrate her life of 99 years. Memorial gifts in Mary’s memory may be made to the Medicine Hat S.P.C.A., 55 Southwest Drive SW, Medicine Hat, Alberta, T1A 8E8. Condolences may be sent through www.saamis.com or to condolences@saamis.com subject heading Mary Schneider. Funeral arrangements are entrusted to