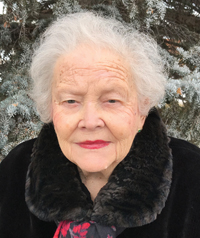 It is not a matter of how one dies but rather how well one has lived.

Our BELOVED SHIRLEY LORRAINE GUNDERSON (Maguire) passed away on Thursday March 28 spending her last days in the arms and care of her devoted daughter Coral at Calgary’s South Health Campus. At her side, were family and friends who kept company in the preceding months at Father Lacombe Care Centre and South Health Campus and prior to that in her home. The staff at both locations are gratefully acknowledged by the family, as well as the Calgary Home Care team and staff and friends at the Millrise Day Program. Shirley would have celebrated her 70th wedding anniversary on March 30th and her 88th birthday on April 4, 2019.

Shirley and Harald met and then lived successively in Medicine Hat, Bow Island, Medicine Hat (again) and then Calgary in 1963. From the time of their marriage they also spent many working vacations at the farm of Shirley’s stepfather, Herman Gustafson and mother Odelia near Hardisty, Alberta. Eventually travels took them across Canada, the USA, Mexico and Europe. Shirley once dreamed of being a home economics teacher but opted instead to become an adored mother/homemaker. She raised four children of her own and continued to look after many others grooming in all: a sense of wonder, humour, steadfastness, kindness, faith, and caring attitudes, all hallmarks of her life. During her last few months, Shirley’s investments in children were returned many times over and even the caregivers noted they had never seen so many young people visit and care for a senior as those who showered their love and affection on her. Shirley would be so very pleased of her influences on others as she often said “It is not good enough that you be like me, you must be more than me in order to continue making this world a better place.” Beyond being a homemaker and childcare provider, Shirley was a florist, office aide for her husband’s publications, supporter of Harald’s political pursuits, devout church member, community volunteer, Poppy Fund Supporter, Sunday School teacher, CGIT, Explorers, and summer camp leader, and Royal Canadian Legion Auxiliary member. She was treasured by family for the many years of love and care extended to her own mother/best friend until her death, but it must be said that her home visitations to the sick and vulnerable extended far beyond family for many decades. Shirley had passions for gardening, music, sewing, nature, painting and of course – cooking. Wife, Mom and Grandmother Shirley was devoted to her family, churches past/present, and all children. She will also be missed by close family friends the Pattisons, Fajardos, Schaabs (especially Dorothea) and the church community. Friends, neighbors and relatives are invited to pay respects at Mountain View Funeral Home on Friday April 12 from 6:00 to 9:00 PM. A celebration of Shirley’s rich and wonderful life will be held at 11:00 AM, Saturday April 13, at Lutheran Church of our Saviour, (8831 Fairmount Drive SE, Calgary AB, T2H 0Z4). This will be followed by a graveside committal at Mountain View Memorial Gardens. To express condolences, please visit: www.mountainviewmemorial.ca.

One Condolence for “Gunderson, Shirley L”