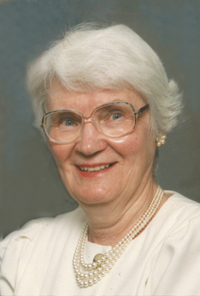 Gladys (Wittig) was born on June 6, 1926 on what was known in the Burstall area as Wittig Corners. She was the eldest child of George and Esther (Schlotthauer) Wittig. Gladys died peacefully in Medicine Hat on September 12, 2020.

Gladys met her true love Clarence Dieterle while he was on furlough from the RCAF, and they married in 1947. She will be interred on what would have been their seventy-third wedding anniversary. Gladys is adoringly remembered by her three loving daughters Patricia (David) Byron, Marilyn Dieterle and Kathleen (Neil) Burbidge; her grandchildren David (Amanda) Byron, Stephen (Nikkei) Byron, Liz Alexander (Sean McGladdery), Margo (Tim) Stewart, Matthew (Julie) Burbidge, Nelson (Christine) Burbidge and her great grandchildren Ben and Lily Byron, Abigail and Bruce Burbidge, Annie Burbidge and James Stewart.

Gladys became a teacher to fulfill her mother’s wish. At the young age of 18 she left the security of her family and farm life and moved to Moose Jaw to begin her training. She completed the certification while also working for her room and board but spoke fondly of those memories. She taught for many years and often former students would stop to greet her and ask if she remembered them.

Gladys was predeceased by her devoted husband, Clarence; sister, Marlene and brothers, Bob and Fred. She will be dearly remembered by her sisters -in-law Edna Dieterle, Joyce Wittig, Gayle Wittig, Joyce Neigum and many nieces and nephews.