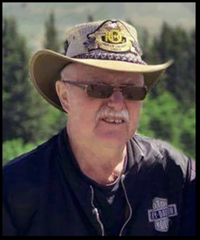 After a valiant battle with cancer, the family of Dirk ‘Dick’ Rosendal is heartbroken to announce that he passed away peacefully in his home in Medicine Hat on Wednesday, October 7, 2020, at the age of 72 years. Along with Henny, his beloved wife of 48 years, Dick will be lovingly remembered by his son, Brent (Tawm) and their son, Owen; daughter, Renée (Jace) Anderson and their sons, Elijah and Caleb; brothers, Henry, George, Winston, Walter and Albert; sisters, Wilma and Margaret as well as their spouses and families. He is also survived by Henny’s family, Jane, Gerda, Conny (Rod) and their families. Dick was predeceased by his grandson, Micah in 2009; parents, Brandt and Hendrika Rosendal; Henny’s parents, Tony and Gerda Vonk; brothers-in-law, Leen Vonk and Hank Aasman as well as his great-nephew, Donovan Weiss. Dick was born on the family farm in Kootwijbroek, Netherlands, on January 27, 1948. His family immigrated to Canada in 1950 and eventually settled in Medicine Hat in 1962. Dick enjoyed farming, mechanics and curling but his greatest love was his Harley Davidson motorcycle. Some of Dick’s fondest memories were camping with his family and his hunting trips with Reuben. He was a well liked, quiet and hard working man who never complained, even after being diagnosed with cancer. Even in death, he showed great strength and dignity. Dick loved the Lord and we rejoice that this is a temporary goodbye, until we meet again. Dick’s love for his family will be forever remembered and he will be greatly missed. Due to COVID 19 restrictions, the Funeral Service will be by invitation only. The Funeral Service will be held at Cook Southland Funeral Chapel, 901 – 13 Street S.W., Medicine Hat on Tuesday, October 13, 2020, at 10:30 a.m. Those wishing to watch the service via the live stream are encouraged to visit www.cooksouthland.com and click the view broadcast button on the homepage at service time. (Condolences may be expressed by visiting www.cooksouthland.com) In lieu of flowers, memorial donations in Dick’s name may be made directly to AJ’s Loan Cupboard, Bay 4 – 602A Clay Avenue S.E., Medicine Hat,â€ˆAB., T1A 3V2 or to the Medicine Hat & District Health Foundation, memo: NICU, 666 – 5 Street S.W., Medicine Hat, AB., T1A 4H6. Honoured to serve the family is