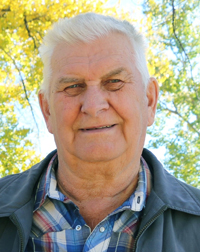 Mr. Elwyne Klettke of Medicine Hat, beloved husband of the late Joan Klettke, passed away on Tuesday, October 6th, 2020 at the age of 84 years. Elwyne leaves to cherish his memory two sons, Larry (Angela) Klettke of Stettler, AB, James Klettke of Eston, SK, and one daughter, Elaine Matson of Calgary, AB; six grandchildren, Christa (John Coppola), Jenelle (Quinn McLean), Tiffany Matson, Candace (Cam Davis), Danelle (Dean Jones), and Briana (Tyler Bauman); as well as fourteen great grandchildren. Elwyne was predeceased by his wife, Joan; his daughter, Lori Diane; his parents, Otto and Lillian Klettke; his only brother, Wayne Klettke; his son-in-law, Chuck Matson; and great granddaughter, Kiya Jade Matson-Tekeste. Elwyne was born in Kindersley, Saskatchewan on August 17th, 1936. He was raised southeast of Kindersley on the family farm in Madison, Sask. For several years Elwyne attended school at a small local schoolhouse in the village of Madison. Elwyne’s children note that one of his greatest strengths was his work ethic. Growing up on a farm he learned that life was about making the most of what you had and working hard in order to achieve further success. As a young adult Elwyne, his brother Wayne, and father Otto formed Klettke and Son’s, a heavy equipment operation company. On March 14th, 1959 he married the love of his life, Joan Margaret Flatt. Their journey together, until the time of her passing in 2008, took them on several adventures with their young family: Lori, Elaine, Larry and James. Elwyne spent several years in oil and gas with companies like BJ Hughes and Nowsco Well Services. When his parents retired in 1972 from the farm in Madison, SK, Elwyne and Joan spent five years back in Madison on the family farm. In 1977 they moved to Brooks area and re-entered the oil and gas industry with Canan Cementers. Shortly thereafter he partnered with his friend Dick Malone to purchase Superior Oilwell Cementers. Together they operated their business in the town of Brooks until his retirement to Medicine Hat in August of 2004. One of the greatest joys for both Elwyne and Joan were their many winters spent in Yuma, Arizona; they met and enjoyed the company of so many friends during those years. Due to Covid-19 restrictions the family will be holding a small private memorial service at Hillside Cemetery in Medicine Hat in the month of November. There will be a live stream available for friends and family that are unable to attend; a link to the live stream will be provided on the Saamis Memorial website. Memorial gifts in Elwyne’s memory may be made to the Margery E. Yuill Cancer Centre, c/o Medicine Hat and District Health Foundation, 666 5th Street SW, Medicine Hat, Alberta, T1A 4H6, or to the St. Joseph’s Carmel Hospice, 156 3rd Street NE, Medicine Hat, Alberta, T1A 5M1. Condolences may be sent through www.saamis.com or to condolences@saamis.com subject heading Elwyne Klettke. Funeral arrangements are entrusted to