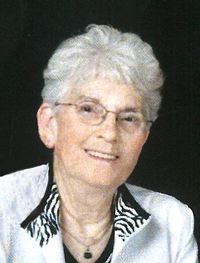 Mary English of Medicine Hat, beloved wife of the late Ralph English, passed away on Thursday, October 15th, 2020 at the age of 88 years. Mary leaves to cherish her memory her children, Mary Louise (Danny) Anderson of Canmore, AB, Shari English (Dean) Verpy of Medicine Hat, AB and Roderick (Dawn) English of North Battleford, SK; six grandchildren; and three great- grandchildren. Mary was predeceased by her husband, Ralph in 2013; parents, Walter and Mary Smith; and her son, Lynnwood, in 1976. Mary was born on October 11th, 1932 in Gull Lake, SK., where she was raised and attended school. She moved to Regina, SK to attend the Regina School of Nursing and graduated in 1954. She married Ralph that same year in Medicine Hat, AB. Together they raised their family and farmed NW of Gull Lake, SK until they retired to Medicine Hat, in 1993. Memorial gifts in Mary’s memory may be made to the Autumn House Independent Living Facility, Box 630, Gull Lake, SK S0N 1A0. Condolences may be sent through www.saamis.com or to condolences@saamis.com subject heading Mary English. Mary and Ralph’s cremated remains will be interred at a later date. Funeral arrangements are entrusted to